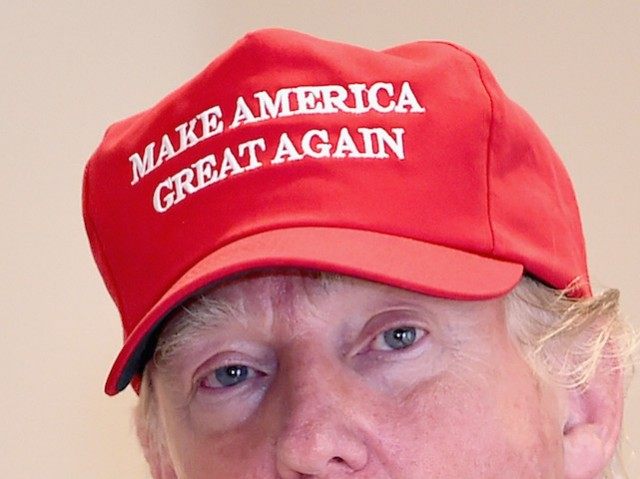 Donald Trump wanted to talk trade, telling an audience here that the country is “getting killed” and losing jobs. He ticked off the names of companies that have moved or planned to move their business overseas – and if they do that while he’s president, he said, they’re going to pay a 35 percent import tax.

“Five-hundred billion, and you’re talking about a trade war,” Trump said. China is “behaving very, very badly” by devaluing its currency, he said, adding that once he is president, China will “behave and China will be our friend.”

The presumptive presidential nominee headlined a fundraiser here to help New Jersey Gov. Chris Christie retire his campaign debt. Attendees were charged $200, though some said they didn’t pay anything to get in the door, and students ponied up $35. Christie introduced Trump, with the two hugging and slapping each other on the back.

“He has brought greatness to every enterprise he has ever led,” Christie said of Trump.

But the crowd at a National Guard Armory, whose drop ceiling was outfitted with crystal-studded chandeliers, was here for one person: Trump. The businessman spent a good chunk of time on trade, decrying NAFTA and vowing to bring back American jobs.

“My trade deal is very simple,” he said. “Here’s what it is: I’m going to make great deals for our country.”

The candidate cited the example of Carrier, an air conditioner company that plans to leave Indiana for Mexico, as a business that likely wouldn’t leave if there were a 35 percent tariff tacked on to their imports. Trump often talked about the company while campaigning in Indiana, a state whose GOP primary he won handily.

“As president of the United States, am I allowed to call the president of an air conditioning company? May I?” Trump asked Christie at the event. “He said only one time,” Trump said as he looked out onto the crowd. The real estate mogul said his wife would tell him not to do it because he’s president, “but it’s so much fun for me.”

And what would he tell them?

“Enjoy Mexico – it’s a wonderful place, beautiful weather. I hope you like 120 degrees,” Trump said. “Every unit you make that you sell into the United States you’re gonna pay a 35 percent tax.”

“I’m not eating Oreos anymore … neither is Chris,” Trump said. Christie had gastric bypass surgery a few years ago.

Trump also brought up an EgyptAir plane that crashed into the Mediterranean Sea on Thursday. Debris from the jet has been found, authorities said. Investigators said they are leaving open all possibilities for the crash. A top Egyptian aviation official suggested that terrorism was more likely than mechanical failure, but U.S. officials cautioned it is too early to know what definitively happened.

Trump excoriated Democratic front-runner Hillary Clinton, who said in an interview with CNN on Thursday that Trump’s anti-Muslim sentiment and “wrongheaded” comments make it more difficult for the United States to fight terrorism.

In a statement, Trump’s campaign said Clinton has “bad judgment” and is “unfit” to be president. Clinton retweeted the statement and wrote: “If you cite supporting torture and hosting pageants as foreign policy ‘qualifications,’ your definition needs work.”