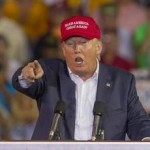 Republican Donald Trump is pulling away from the pack in the race for the party’s U.S. presidential nomination, widening his lead over his closest rivals in the past week, a Reuters/Ipsos poll showed on Friday.

Reuters reports that Republican voters show no signs they are growing weary of the brash real estate mogul, who has dominated political headlines and the 17-strong Republican presidential field with his tough talk about immigration and insults directed at his political rivals.

Nearly 32 percent of Republicans surveyed online said they backed Trump, up from 24 percent a week earlier, the opinion poll found. Trump had nearly double the support of his closest competitor, former Florida Governor Jeb Bush, who got 16 percent. Retired neurosurgeon Ben Carson was third at 8 percent.

Even when Trump was pitted directly in the poll against just his top two competitors, 44 percent backed him. Bush won about 29 percent of respondents, and Carson 25 percent.