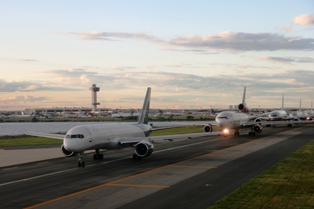 Prosecutors in New York said a traveler has been charged with hate crimes for attacking a Muslim airline employee at John F. Kennedy International Airport, telling her President Trump “will get rid of all of you.”

The Queens District Attorney’s Office said in a statement Thursday that 57-year-old Robin Rhodes, of Worchester, Mass., physically and verbally assaulted a Delta employee, who was wearing a hijab, Wednesday evening, in the airport’s Delta Sky Lounge. Prosecutors said he began shouting profanities at the woman, ranting about Islam and the Islamic State – then kicked her and kept her from getting away.

“Trump is here now,” he said, according to prosecutors. “He will get rid of all of you. You can ask Germany, Belgium and France about these kind of people. You will see what happens.”

“The bigotry and hatred that the defendant is accused of manifesting and acting upon have no place in a civilized society – especially in Queens County, the most culturally diverse county in the nation,” Queens District Attorney Richard A. Brown said in the statement. “Crimes of hate will never be tolerated here and when they do, regrettably occur, those responsible will be brought to justice.”

It was not immediately clear whether Rhodes has an attorney.

Delta Air Lines could not immediately be reached for comment.

Prosecutors said Rhodes was in the Delta Sky Lounge on Wednesday evening, waiting for a connecting flight from Aruba to his home in Massachusetts.

Rhodes approached Delta employee Rabeeya Khan and stood at the doorway to her office in the lounge, asking, “Are you [expletive] sleeping?” according to prosecutors.

“Are you praying? What are you doing?” Rhodes asked the woman before he punched her office door, which slammed into her chair, according to the criminal charges cited by the Queens District Attorney’s Office.

When she asked Rhodes what she had done to make him act like that, he replied, “You did nothing but I am going to kick your [expletive] a–,” according to prosecutors.

Rhodes allegedly kicked the woman’s right leg and, when she tried to leave, he allegedly blocked her path.

Rhodes followed her and “began to bow down in imitation of a Muslim praying,” prosecutors said.

After the incident, prosecutors said, Rhodes told the arresting officers, “I guess I am going to jail for disorderly conduct. I couldn’t tell if it was a man or woman because their back was to me and they had something covering their head.”

If Rhodes is convicted, he could face up to four years in prison.

The New York chapter of the Council on American-Islamic Relations said that about the same time as Wednesday’s attack at JFK airport, more than 3,000 peaceful protesters had congregated in New York City’s Washington Square Park to show support for Muslims and undocumented immigrants. CAIR-NY called Rhodes’s alleged actions an “apparent Islamophobic hate attack” against a Muslim.

“No election or president gives bigots the right to attack Americans going about their daily business and observing their faith,” Afaf Nasher, executive director of CAIR-NY, said Friday morning in a statement. “New York’s airports are a gateway to travelers from around the world. They should showcase our diversity and religious freedom, not bigotry and hate.”