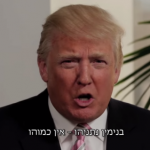 Republican presidential frontrunner Donald Trump will support Israel when it comes to defending itself from Iran’s nuclear ambitions.

Trump says he considers Israeli Prime Minister Bibi Netanyahu a good friend of his will help the Republican hopeful to support such an act.

In an interview on the Hugh Hewitt radio show on Thursday, Trump was asked if he would stand by Israel if it acts unilaterally against Iran in face of the Iran nuclear deal.

From the Hugh Hewitt interview:

HH: And if Israel acts unilaterally against Iran because they view this deal as so bad, will you unequivocally stand by the action of the Netanyahu government?

DT: Of course, I will. In fact, he’s a friend of mine. I did commercials for his reelection. And according to what he said, I’m the only celebrity, he’s used the word celebrity, this was a while ago, that did commercials, that he asked to do commercials. But he’s a good man, and I would absolutely stand with him.

You can see Trump’s 2013 endorsement video of Netanyahu here.

He said, “You truly have a great Prime Minister in Benjamin Netanyahu. There’s nobody like him. He’s a winner, he is highly respected, he’s highly thought of by all and people really do have great, great respect for what’s happened in Israel. So vote for Benjamin — terrific guy, terrific leader, great for Israel.”