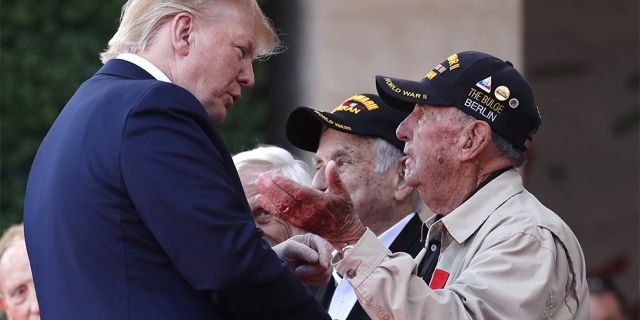 President Donald Trump paid tribute Thursday to old men who were once the young Americans who stormed an occupied and fortified shore 75 years ago, and he called the storied D-Day invasion “an epic battle and the ferocious eternal struggle between good and evil.”

Trump, French President Emmanuel Macron and other leaders of the nations that defeated Nazi Germany joined the thinning ranks of veterans of the June 6, 1944, D-Day invasion at the cemetery where nearly 10,000 American war dead are buried.

Trump honored the sacrifice and patriotism of veterans in their 90s, who sat hunched behind him in a chill wind at the last major milestone anniversary most are likely to see. The avowed nationalist celebrated American bravery and the unity of fighting forces that landed here and pushed on into Europe, helping to turn the tide of the war.

“They came from the farms of a vast heartland, the streets of glowing cities and the forges of mighty industrial towns,” Trump said of the teenagers and young men who approached the Normandy shores. “Before the war, many had never ventured beyond their own community. Now, they had come to offer their lives halfway across the world.”

He offered at most a measured memorial to the transatlantic partnership and the foundation of America as the world’s indispensable nation.

Dozens of American veterans of D-Day were among other veterans and their families on a stage erected within the semicircular stone memorial at the Normandy American Cemetery.

Trump recognized several by name, including former Army medic Ray Lambert, of West End, North Carolina, who served in the 16th Infantry Regiment of the Army’s 1st Division, known as “The Big Red One.”

Lambert, 98, has said this is probably his final visit to Normandy. Trump broke off his remarks as the crowd cheered Lambert, then turned and crossed the stage with Macron to greet him. Lambert doffed his blue ball cap, embroidered with “D-Day veteran,” to the leaders and the crowd.

There is an 80th anniversary planned, but even the youngest represented here Thursday would be approaching 100 then.

French and American flags flew at half-staff behind the crowd. Omaha Beach below was not visible from the elaborate stage, also decorated with French and U.S. flags, as well as mock-ups of the white crosses and Stars of David that line the grass beyond.

Trump has pulled the United States away from Europe and the international rulemaking institutions that grew out of the end of World War II. He complains about what he calls imbalances in trade, defense spending and other issues. Trump’s inward-looking view is not unique, as nationalist leaders and movements are on the rise in Europe.

Trump’s address was his first as president that encompassed such a sweeping mix of history, patriotism and pathos. He read from a screen before him, appearing to stick closely to the script.

“We are gathered here on Freedom’s Altar. On these shores, on these bluffs, on this day 75 years ago, 10,000 men shed their blood and thousands sacrificed their lives for their brothers, for their countries, and for the survival of liberty,” Trump said. “Today, we remember those who fell here, and we honor all who fought right here in Normandy. They won back this ground for civilization.”

The landings were the largest joint naval, air and land assault ever undertaken, an audacious feat that helped cement the role of the U.S. military as the world’s preeminent fighting force.

Reminders of what was built from the ruins of postwar Europe came from Macron, who praised NATO and other institutions that Trump has criticized as outdated and unfair to the United States.

Before Trump spoke, Macron delivered a message that mixed praise for America’s veterans with a full-throated embrace of the kind of multilateralism that Trump’s “America First” agenda is designed to resist.

“We shall never cease to perpetuate the alliance of free people,” Macron said, arguing that various global institutions such as the United Nations, NATO and the European Union were created for that purpose.

In the past, Trump has criticized all three of those organizations. He has repeatedly claimed, for example, that the European Union was created “to take advantage of the United States.”

In his speech, Trump praised the various countries that joined the Allied fight against the “wicked tyranny of the Nazi empire,” name-checking the Canadians, the British and “the fighting Poles, the tough Norwegians and the intrepid Aussies,” as well as French resistance fighters.

“They were the citizens of free and independent nations united by their duty to their compatriots and to millions yet unborn,” he said.

Trump’s 2016 political brand was a fuzzy mix of “America First” isolationism and flag-waving nostalgia for a time when the United States had a more certain footing in a changing world.

He has been openly hostile to NATO, the transatlantic military alliance that is a direct heir of D-Day, although his language has softened since he proclaimed during his 2016 campaign that NATO was “obsolete.”

Some see the emotional power of the Normandy landscape as a last-ditch attempt to ensure that those transatlantic ties still hold.

“As far as the Europeans are concerned, I think the general tone is one of desperation at the possibility that the lessons of history could be forgotten,” said François Heisbourg, a former French presidential adviser and a senior adviser at the International Institute for Strategic Studies, a London-based think tank. “The lesson of history is that the West exists, and when the West is divided, very bad things happen. We don’t forget that it took the Americans two years to get involved in World War II. But we also know we were saved by the Americans – not only by the Americans, but without the Americans it would not have been possible.”

Other European observers see the anniversary as a more positive opportunity to reflect on deeper transatlantic divergences that began before Trump took office and that will likely continue after he leaves.

“It’s both a reminder and a sign of the sacrifice, but it’s also an opportunity to think about the future,” said Benjamin Haddad, a French political scientist and the director of the Atlantic Council’s Future Europe Initiative.

“It’s important for European leaders to not over-focus on the personality of Trump – the quirks and the tweets,” he said.

Some things, Haddad added, such as the tariffs that Trump has threatened to levy against the European Union, were a direct function of his personality. But there are others, such as the pivot to Asia and demands that Europeans shoulder a bigger share of their defense costs, “that will outlast him, and that to be fair are entirely reasonable from an American perspective.”

Giving a speech on the beaches of Normandy is something of a rite of passage for American presidents, who, regardless of their party affiliation, have typically used the opportunity to drive home a message about American internationalism.

“We in America have learned bitter lessons from two World Wars,” Ronald Reagan said in 1984, in the course of his memorable “Boys of Pointe du Hoc” speech, written by Peggy Noonan. “It is better to be here ready to protect the peace, than to take blind shelter across the sea, rushing to respond only after freedom is lost.”

In 2014, Barack Obama delivered another rousing address whose message was similar.

After the speeches, Trump joined Macron near the waterfront of Omaha Beach as vintage fighter planes and bombers flew overhead. Joined by first lady Melania Trump and Brigitte Macron of France, the two men then left flowers next to the graves of fallen Americans near the beach.

Trump spent less than a day in France – just long enough for the D-Day memorial and a meeting with Macron. He was returning to his golf resort in Ireland on Thursday afternoon, missing other D-Day ceremonies scheduled for later in the day.

Trump’s relationship with the French leader – once seemingly sanguine enough to warrant the label of “le bromance” – has soured in recent months.

All was chummy during Trump’s July 2017 visit to France, his first state visit as president, when he marveled at the size and spectacle of the French military’s Bastille Day parade – a show he then tried, unsuccessfully, to re-create in Washington.

At the time when few European leaders – most notably German Chancellor Angela Merkel – seemed willing to engage with Trump, Macron stood out, himself freshly elected and the youngest president in modern French history.

But then he thought he could negotiate with Trump: first on preserving the Paris climate accords, then on the Iran nuclear deal, both signature policy achievements of the Obama administration.

Trump tore up the climate deal in spite of Macron’s entreaties, saying he was elected to represent “the citizens of Pittsburgh, not Paris.” But the true humiliation came in April 2018 in Washington, where Macron had traveled on a state visit with the sole objective of persuading Trump not to abandon the hard-won agreement with Iran.

Trump did it anyway, flicking a piece of dandruff off Macron’s lapel. Macron was pilloried in the press at home for seeming too obsequious: Much of the French press focused on one photograph of Trump leading Macron by the hand down a White House pathway, like a parent with a child.

But relations between the two men reached a level of open hostility in November 2018, when Trump flew to Paris for the 100th anniversary of the end of World War I. As Air Force One arrived, he attacked Macron based on his misunderstanding that the French president had called for a European army that would defend the continent against the United States.

When Macron then gave a soaring speech about the evils of nationalism, Trump took it as a personal attack, firing a round of Twitter artillery at his French counterpart.

“The problem is that Emmanuel suffers from a very low Approval Rating in France, 26%, and an unemployment rate of almost 10%,” Trump wrote at the time. “He was just trying to get onto another subject. By the way, there is no country more Nationalist than France, very proud people-and rightfully so!”

Despite these previous tensions, however, Trump and Macron put on a show of friendliness Thursday, embracing and lingering to chat alongside their wives after the commemoration. If the two have yet to have a formal rapprochement, the relationship bore no visible signs of strain.

Some current American politics were also in evidence, with House Speaker Nancy Pelosi, D-Calif., a frequent Trump adversary, leading a delegation of some 60 U.S. lawmakers. She told reporters in Washington that she was not sure she would interact with the president at all here.

Trump’s own relationship to military service was a subtext. He received multiple draft deferments during the Vietnam War and previously said he was “lucky” to avoid service. But in an interview broadcast Wednesday, Trump said that while he “was not a fan” of the Vietnam War, he would have fought willingly.

“I would not have minded that at all,” Trump told British interviewer Piers Morgan. “I would have been honored.”