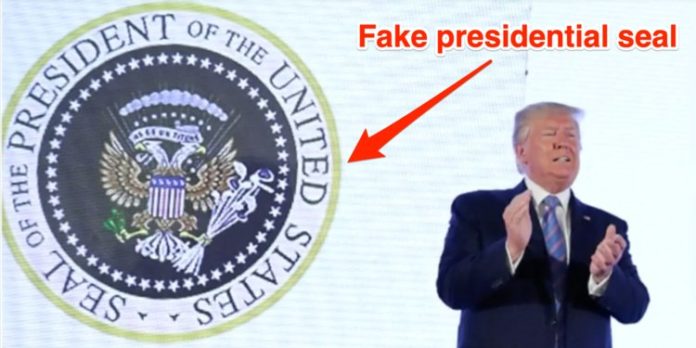 At first glance, there was nothing unusual about President Donald Trump’s introduction Tuesday at Turning Point USA’s student summit. In many ways, it mirrored the production style that has become synonymous with Trump’s campaign rallies.

Following a 12-minute video illustrating Trump’s rise to the presidency, music blared as the president’s name flashed across a giant screen in a bold shade of red. Trump took the stage and soaked in the raucous cheers from hundreds of young supporters packed inside the Marriott Marquis in Washington.

Charlie Kirk, Turning Point’s outspoken founder and executive director, was on his left. But the image on the screen to Trump’s right – captured in dozens of photos and videos from the event – is less familiar.

The image almost resembles the official seal of the president, but a closer examination reveals alterations that seem to poke fun at the president’s golfing penchant and accusations that he has ties to Russia. Neither the White House nor Turning Point knows how it got there or who created it. On Thursday morning, however, the conservative group announced it had fired the member of its video team who was responsible for displaying the fake seal.

“We did let the individual go,” a Turning Point spokesman told The Washington Post. “I don’t think it was malicious intent, but nevertheless.”

The spokesman called the mistake “unacceptable” and said it was the result of a rushed online search to find an image of the presidential seal to display behind Trump.

The eagle has two heads instead of one – a symbol historically tied to empire and dominance. It closely resembles the bird on the Russian coat of arms and also appears on the flags of Serbia, Albania and Montenegro. Its left talons, rather than clasping 13 arrows, appear to clutch a set of golf clubs.

One Post reader noted a website that sells merchandise featuring what appears to be the same fake seal. In those images, the words on the parody eagle’s banner say “45 es un títere,” which in Spanish translates to “45 is a puppet.” On the official presidential seal, the eagle’s mouth holds a banner with the U.S. motto, “E pluribus unum” – out of many, one. The fake seal on the shop’s merchandise shows the eagle clutching cash in its right talons.

A projection of the true presidential seal was centered behind Trump’s name as he walked onstage. The true seal was also on the lectern where the president spoke for 80 minutes.

A White House spokesman told The Post they did not see the fake seal before it appeared on-screen and referred questions about the incident to Turning Point.

On Wednesday evening, the Turning Point spokesman said he didn’t know where the altered seal came from or how it ended up on a screen behind the president. He said the mistake probably came from the team that handled the event’s audio and visual production.

“I don’t know where they got the image from,” he added.

According to Turning Point, the audio/visual team helped create and coordinate the graphics, images and videos displayed at Tuesday’s event – including the official seal shown behind Trump’s flashing name on the screen. The Turning Point spokesman said the team was made up of staff from his organization and from the hotel.

“Somewhere there was a breakdown. I think it was as simple as a rushed move throwing up an image, and it was the wrong one,” the spokesman said, adding it was unfortunate that the faux seal drew attention away from the event’s star-studded lineup of conservative speakers. “It was an A/V mistake . . . it certainly wasn’t our intention.”

Employees at the Marriott Marquis say the hotel generally does not furnish images or video for groups hosting events there. The venue provides only the space and the technology, such as televisions and projectors. The hotel’s event manager, who helped coordinate the summit, did not return phone messages requesting comment Wednesday.

Richard Painter, who served as the chief White House ethics lawyer for President George W. Bush from 2005 to 2007, said the president’s staff should typically have advance knowledge and command over images and video displayed at events where the president appears.

He called the incident “careless.”