It is painful to publicly criticize something written by a dear friend. But improper public words require a public response.

I have known Chanan Gordon for years and deeply admire his passion to bring all Jews closer to their religious heritage. But Ami’s interview of him in a recent issue left me saddened and puzzled.

He pronounces President Obama an “intellectual lightweight,” “arrogant,” possessive of “a grandiose sense of self-importance” and “a sense of entitlement”; and asserts that his reelection would be a “tragedy.” Reb Chanan’s credentials for reaching those conclusions are that he attended Harvard at the same time as Mr. Obama, and “was close to people who were close to him.” They may even have been in one class together.

Reb Chanan considers it somehow iniquitous that, when at Harvard, Mr. Obama was president of the Harvard Law Review but wrote no articles for it. What’s more, he “heard that Obama took pains to recalibrate its ideological disposition.” Also, the man who would become president, Reb Chanan asserts, was “not popular” with others at Harvard.

“Reliable sources” are cited, one contending that Mr. Obama cut off communication with two former financial backers-a sign, in Reb Chanan’s diagnosis, “of extreme narcissism and being exploitive.”

Reb Chanan kindly concedes that he “has nothing on record where [Mr. Obama] says that he’s a Muslim.” But he asserts, without any specific attribution, that “a common theme in Obama’s administration is that he is not a G-d-fearing person.”

The only accusations in the interview that even pretend to approach the substantive include Mr. Obama’s connection to a radical professor, “Derek Bell” (actually, Derrick)-whom Reb Chanan calls Mr. Obama’s “mentor.” In reality, the only connection between the men was that, as a student in 1991, Mr. Obama once introduced Mr. Bell at a rally about diversifying Harvard’s faculty.

Then there is the “fact” that Mr. Obama “suggest[ed] that Israel go back to pre-1967 borders,” which, of course, isn’t a fact at all. The president said a final peace agreement would be “based” on the 1967 lines, making clear in the very same sentence that it would include land swaps to ensure Israel’s security. The position, in other words, of the past several administrations.

Mr. Obama also, asserts Reb Chanan, “turned his back on Israel in the UN” by “not preventing the Security Council from being addressed by Nadi Pillay,” a critic of Israel. Ms. Pillay (whose first name is Navi) is the UN High Commissioner for Human Rights, and cannot be prevented from reporting to the Security Council.

This sort of defamation and misinformation is expected of the Breitbarts and Limbaughs and Michael Moores of our time, whose partisan stocks in trade are misrepresentation and ill will. But they are, or should be, off limits to all of us who know that the Creator’s very “signature” is emes, Truth.
Anyone, of course, can disagree with President Obama on any or all issues, even, perhaps, to just dislike him for no good reason. But to not even take into account his boycott of the Durban Conference, his rejection of the Goldstone Report, his backing of the Iron Shield and David’s Sling programs (to the tune of $315 million-beyond the $3 billion the US has given Israel annually), his blunt informing of the Arab world (twice) that it needs to accept Israel as a Jewish state, his alacrity in rescuing endangered Israeli embassy guards in Cairo, his condemnation of the Palestinian Authority’s denial of the Kosel Maaravi’s connection to the Jewish people, and his conducting of the largest joint American-Israeli military exercise in history (not to mention his willingness to kill Islamic terrorists) is to forfeit any claim to fairness-or emes.
Which is not to say that he necessarily deserves a second term. If one considers Mr. Obama’s attempts to woo the Palestinians to the peace table, or his economic policies, as outweighing the contents of the previous paragraph one should vote accordingly.

But basing one’s vote, or one’s judgment, on hearsay, armchair psychoanalysis, or incomplete information is not the way of a thoughtful Jew. And I know that Reb Chanan, who remains my dear friend, is a thoughtful Jew. 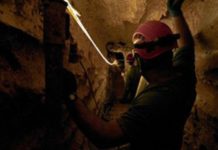 ICE: Arizona Border Tunnel Appears To Be ‘Most Sophisticated’