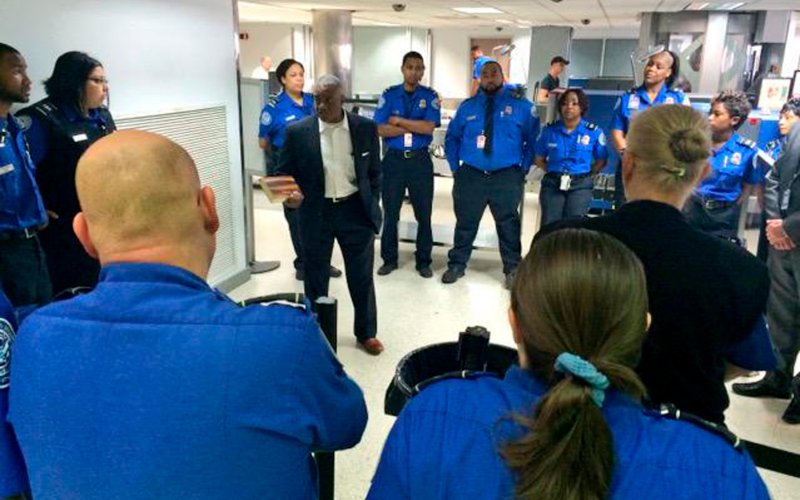 The Transportation Security Administration has declined to say exactly where-and how-employees will be touching air travelers as part of the more invasive physical pat-down procedure it recently ordered.

But the agency does expect some passengers to consider the examination unusual. In fact, the TSA decided to inform local police just in case anyone calls to report an “abnormal” federal frisking, according to a memo from an airport trade association obtained by Bloomberg News. The physical search, for those selected to have one, is what the agency described as a more “comprehensive” screening, replacing five separate kinds of pat-downs it previously used.

The decision to alert local and airport police raises a question of just how intimate the agency’s employees may get. On its website, the TSA says employees “use the back of the hands for pat-downs over sensitive areas of the body. In limited cases, additional screening involving a sensitive area pat-down with the front of the hand may be needed to determine that a threat does not exist.”

Now, security screeners will use the front of their hands on a passenger in a private screening area if one of the prior screening methods indicates the presence of explosives, according to a “security notice” Airports Council International-North America (ACI-NA) sent its U.S. members following a March 1 conference call with TSA officials.

“Due to this change, TSA asked FSDs [field security directors] to contact airport law enforcement and brief them on the procedures in case they are notified that a passenger believes a [TSA employee] has subjected them to an abnormal screening practice,” ACI wrote.

The TSA screens about 2 million people daily at U.S. airports. The agency said it doesn’t track how many passengers are subject to pat-down searches. These searches typically occur when an imaging scanner detects one or more unknown objects on a person or if a traveler declines to walk through the machine and opts for the physical screening.

“Passengers who have not previously experienced the now standardized pat-down screening may not realize that they did in fact receive the correct procedure, and may ask our partners, including law enforcement at the airport, about the procedure,” TSA spokesman Bruce Anderson wrote March 3 in an email, describing why the agency notified police.

The pat-down change, first reported Friday by Bloomberg News, is “intended to reduce the cognitive burden on [employees] who previously had to choose from various pat-down procedures depending on the type of screening lane,” ACI-NA wrote in its notice.

Physical screening has long been one of the public’s strongest dislikes regarding airport security protocols. The TSA has all pat-downs conducted by an employee of the same gender as the traveler, and allows a passenger to request a private area for the screening, as well as to have a witness present. Likewise, the traveler can request that the pat-down occur in public view.

The TSA’s calls to police were an effort to provide local law enforcement “situational awareness” about the new pat-down method, Christopher Bidwell, ACI-NA’s vice president of security, said in an interview. U.S. airports have not expressed any reservations or concerns about the pat-down change, the association said.

“We appreciate our partner, the TSA, providing us information about these universal pat-downs and the standardization,” Bidwell said.