This is the image which the BBC has been using to illustrate how British Jews cope with grief. The mocked-up picture ran alongside a feature on the corporation’s website giving practical tips on dealing with bereavement and explaining how different religions conduct funerals.

It was used on the page for months, but has now been replaced with a picture of a candle after the JC asked the corporation to explain why the image had been selected.

A BBC spokesman admitted the scale of its website meant mistakes occur but could offer no further explanation of why the image had been used.

He said the section of the site was no longer being updated and there had been no review of its content to check whether it was “appropriate.” 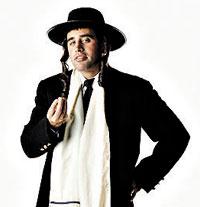 The Board of Deputies this week alerted the corporation to its concerns over the general use of images of Jews on the website.

In a letter to BBC director of news Helen Boaden, Board chief executive Jon Benjamin wrote: “On a number of occasions we have been mystified by the BBC’s use of ‘generic pictures’ which depict only members of the strictly-Orthodox sects of the community.”

He highlighted two news stories about mainstream Judaism – one a community cultural event in Belfast and the other the building of the JCoSS cross-communal school – which carried pictures of chareidi men, complete with black hats, peyos, and flowing beards.

“They in no way illustrate the subject matter of the stories in question or, indeed, mainstream Jewish life in the UK or anywhere in the world,” added Mr Benjamin.

The BBC spokesman said: “We always try to use an appropriate and relevant image and are more than happy to discuss this issue with the Board of Deputies to ensure we reflect the breadth of the Jewish community.”