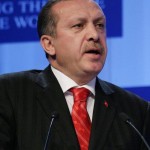 In an interview with Charlie Rose of PBS, Erdogan said the deal would lead to “normalization” with Israel and will be signed in the next few weeks.

“With the completion of this stage, we may move toward a process of normalization. I have spoken with my colleagues in the Foreign Ministry and I think it is a matter of weeks,” Erdogan told PBS.

According to Israeli Army Radio, Israeli government officials confirmed that the deal with Turkey was nearing. The deal will likely include a $20 million compensation package for the Turkish family members of the victims of the 2010 Mavi Marmara flotilla incident, which led to the severing of Turkey-Israel relations. After militants attacked Israeli soldiers on board the flotilla, which was trying to break the naval blockade of Gaza, eight Turkish nationals and one Turkish American were killed in clashes.

The push to reestablish relations began during a March 2013 visit to Israel by U.S. President Barack. At the time, Obama urged Israeli Prime Minister Benjamin Netanyahu to apologize to Erdogan for the flotilla deaths. Netanyahu made the apology over the phone.

“The Turkish government believes that making up with Israel will alleviate some of the recent tension with the U.S., and President Obama reportedly emphasized his expectation that Erdogan make tangible moves toward patching things up,” Dr. Michael Koplow-who maintains a blog on Turkey and Israel called “Ottomans and Zionists” and serves as the program director at the Washington, DC-based Israel Institute think tank-recently told JNS.org.