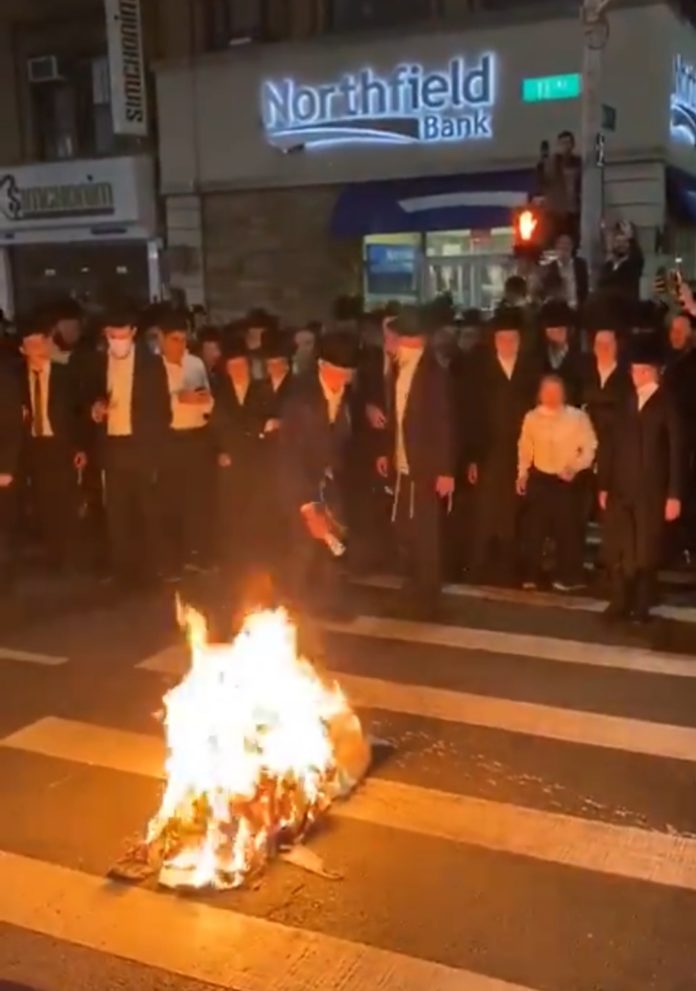 Jew versus Jew attacks, protests and covert acts of anti-Semitism are just some of the alleged effects of the battle against COVID-19 and the push by New York state officials to stem the pandemic’s rise in COVID hotspots.

For a second night in a row, hundreds of Chassidim took to the streets on Wednesday evening to protest new regulations that would effectively shutter synagogues in predominately Orthodox neighborhoods for at least the next two weeks in an effort to limit the spread of the coronavirus.

The regulations were announced by Gov. Andrew Cuomo in a press conference on Tuesday afternoon. On Thursday, Agudath Israel of America and several synagogues filed a lawsuit seeking an injunction to the governor’s orders. They claimed that it deprives plaintiffs “of their free-exercise rights during three Jewish holidays,” and that although it “discriminates against all religions by singling out houses of worship for more restrictive treatment than similarly situated secular institutions, the order disproportionately impacts Orthodox Jewish services.”

Videos of the protests, which organizers claim were “peaceful,” included images of mostly Orthodox men in black suits and white shirts—many without masks—blocking a New York City transit bus and, in some cases, shouting “Jewish Lives Matter.” At least one fire was set in the middle of the street.

Two Orthodox Jews, including a journalist, were attacked during the protests for not agreeing with the protesters, and at least one was taken to the hospital.

“What we have been witnessing on the streets of Boro Park over the last 48 hours does not reflect the values of our beloved community,” New York State Assemblyman Simcha Eichenstein said in a statement. “I, like everyone in the community, am deeply saddened and outraged by the rhetoric and draconian measures that Gov. Cuomo announced just the other day. It is despicable and completely unacceptable. But violence is never the answer. Ever. … I am asking, I am begging and I am imploring the handful of people within the community to end the violence. It will severely hamper our response.”

Speaking to JNS before the lawsuit was filed, Rabbi Avi Shafran, director of public affairs for Agudath Israel, said, “there is a time-honored right in America to protest government actions, and while protests in the current situation are not necessarily the most effective way to go, if they are peaceful, they are not improper.

“Violence of any sort during protests, however, is reprehensible and against all that Judaism stands for. Likewise, incitement to violence or to hatred,” he continued. “The toll that such incitement and rabble-rousing takes is serious and great. Anyone truly invested in the cause of protecting our right to daven in our shuls and uses incitement or violence is a hypocrite,” he continued. “Concern for others is as central to our faith as prayer.”

Orthodox leaders have said that they are working to increase mask-wearing and reinforce the importance of social distancing in their congested neighborhoods. Many Orthodox Jews live in tightly concentrated areas and have large families that often make for more densely populated neighborhoods.

At a pre-Sukkot mask giveaway drive in Boro Park, sponsored by Agudath Israel of America and the Boro Park Jewish Community Council, distributed more than 400,000 masks were given away in just two hours.

In Rockland County, N.Y., which is also set to see synagogues shuttered because of the uptick in coronavirus cases, county legislator Aron Weider, a member of the local Chassidic community, recorded a two-minute video in Yiddish asking people to wear masks—not because the governor or mayor wants them to, Weider said, but because it’s the will of the aebisther, using the Yiddish term for G-d.

According to an English translation provided to the video, the county legislator told viewers that he had just lost a friend to COVID-19 and said, “It is G-d’s will that we wear a mask. And I’d even venture to say G-d himself wears a mask. As we pray these days, ‘G-d show us your face.’ In essence, we are asking G-d to remove the virus so that he reveals his face that is currently covered with a mask.”

For months, Orthodox Jews have complained of a double standard as authorities seemed to let protesters in New York gather en masse while criticizing Jewish gatherings.

Now, it seems, some leaders in the Orthodox community have decided to take a page right out of the Black Lives Matter playbook to voice their displeasure with Cuomo’s closures, arguing that they are exercising their constitutional right to protest.

They have also expressed fears that singling out Jewish communities will increase anti-Semitism.

In support of the public-health decisions

Not all Jews agree that the governor and New York City Mayor Bill de Blasio overstepped their bounds. A group of 300 rabbis from various denominations released a statement in support of the shutdown.

“We are rabbis and other Jewish religious leaders representing every movement of Judaism, who stand in support of Governor Andrew Cuomo and Mayor Bill de Blasio for using data-driven, geographically-based efforts to contain the spread of COVID-19,” read the statement from the group, New York Jewish Agenda, a “network of mainstream liberal Jewish leaders” as per its website. “We condemn the lack of compliance with public health directives and recent violent reactions from some individuals within the Orthodox Jewish community to enforcement of those mandates. … ”

The rabbis also rejected the call by some that the actions were anti-Semitic in nature.

“Anti-Semitism against Orthodox Jews is serious and widespread, and we must ensure that the implementation of public health policies is both culturally appropriate (e.g., more Yiddish speaking contact tracers) and does not promote anti-Semitism either in its language or in its actions. But to be clear, requiring masking and social distancing for all gatherings, including religious gatherings, is not anti-Semitism.”

‘Causing others to hate Jews’

All of this activity comes during the intermediate days of Sukkot, Chol Hamoed, which is a time when many Orthodox Jews are on vacation from school and work, and spend time doing family activities. Often, these days are filled with time at local parks, malls and elsewhere; however, during the pandemic, they are finding that not everyone is welcoming them.

The Township of Howell, in Monmouth County, N.J., announced the closure of local parks this week “as a result of increased complaints relating to use of our parks, and the failure of people to follow protocols relating to social distancing and mask wearing.”

Howell borders Lakewood, N.J., which is home to a large ultra-Orthodox community. According to the New Jersey Department of Health, as of Thursday, the number of coronavirus cases has been steadily rising in Lakewood, with 206 cases just diagnosed there and primarily effecting men ages 19-49.

A memo from the office of township manager went on to say that they will “sanitizing” the fields with assistance from the Township of Lakewood. Many speculated that the closure was as a result to Jewish families from Lakewood visiting the parks.

While most Orthodox Jews are likely following the rules, some are indeed openly flaunting them.

On Tuesday, for instance, groups of Orthodox Jews were seen visiting the Northern New Jersey’s American Dream mall, a new indoor entertainment venue with shops, an amusement park and a skating rink. Security guards went around asking people to put on masks, even providing them if needed and not everyone complied. At one point, a security guard was heard chastising a patron who had been told at least twice before that afternoon to wear a mask.

That kind of behavior, say Jewish leaders, is unacceptable.

“Aside from the health reasons that medical experts cite for social distancing and masking, if identifiable Jewish people are seen in public places not distancing or not wearing masks, there is a clear and present danger of aivah, causing others to hate Jews,” said Shafran of Agudah. “That, and the resultant chilul Hashem, should be sufficient reason for all of us to heed the reasonable regulations that health authorities have put in place.”