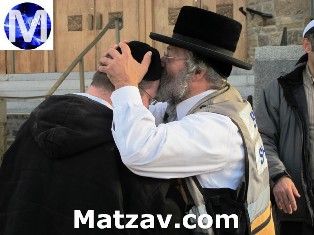 Rabbi Mordechai Jungreis, Nikolsburg Rebbe of Boro Park, was at his favorite haunt when the desperate phone call came in.

It was early on the afternoon of Wednesday, October 29 – the day after Hurricane Sandy ravaged the Northeast. After his regular morning work as a Rebbi for young children in Yeshivas Chaim Berlin – a position he has held for over 30 years – the Rebbe returned to his beis medrash at 4912 16th Avenue to sit with “his boys.” These are the many young men who live in his shul because they have no other home. The boys are attracted by the Rebbe’s charisma and warmth, and he has become a surrogate father to them.

They sat together singing Eileh Chamdah Libi when the Rebbe’s phone rang with an urgent message. It was someone in Bell Harbor, the Brooklyn neighborhood near the sea that had taken the full brunt of the hurricane’s onslaught. People there were desperate. There was no electricity, no water, no food… no roof! That was more than enough for the Rebbe. His warm heart sprung into action.

Taking the boys with him, the Rebbe donned rubber boots and drove to 15th Avenue. There he stocked up with cases of water, tissues, baked goods and hundreds of sandwiches. They were soon joined by other volunteers from Shomrim and similar organizations while they drove out to Bell Harbor to assist the disaster-stricken community there.

As they approached the neighborhood they were shocked by the now-familiar scenes of devastation. They were still a number of blocks from the oceanfront when they met huge deposits of sand, and mounds of soggy furniture and other ruined possessions piled in the streets. The Rebbe remarked that it was reminiscent of the destruction wrought by the Nazis during World War II. Although they were accompanied by emergency vehicles with their lights and sirens, it took the motorcade an extra 20 minutes to weave through the debris so they could reach their destination.

When they arrived the Rebbe immediately began distributing the lifesaving supplies he had brought to everyone they passed. People who had lost everything stopped for a word of encouragement and a bracha from the Rebbe. Wherever they turned they met other Jewish volunteers who had similarly dropped what they were doing to bring relief to the area. The sight was an incomparable Kiddush Hashem.

As they passed by one beis medrash, dark and locked, the Rebbe realized that the gabbaim were too preoccupied with their personal losses to worry about the shuls. Together with Shomrim he broke through the doors of one shul and headed straight for the basement. The Rebbe waded through several feet of oily slick to reach the locked Aron Kodesh. One of the Shomrim members honored the Rebbe with “Pesicha” and by the shine of flashlights the door was broken open. Inside they found four Sifrei Torah that had been soaked through in he flooding.

The Sifrei Torah were transferred to the Chesed Shel Emes emergency recovery van that was waiting outside. The volunteers moved on to the next shul to save the Sifrei Torah there. The same scene greeted them once again. Over the course of the afternoon the Rebbe shlit”a was instrumental in recovering 25 Sifrei Torah.

The Rebbe stopped at many private homes to offer assistance and words of chizuk. In one shul he stepped up to the podium to deliver an address to the residents, many of whom had suffered the loss of their entire homes. His words struck deep into their hearts, infusing them with fresh hope and strength to pick themselves up and go on.

When they were done in Bell Harbor, the Rebbe escorted the Sifrei Torah back to the Boro Park headquarters of Chesed Shel Emes. There they were carefully unrolled and spread out in an attempt to salvage as many of the Sifrei Torah as possible. With that operation concluded, the Rebbe finally returned to his beis medrash, “his boys” in tow.

On the way the Rebbe was greeted by incredulous looks. “Rebbe, you look like you just made Pesach!” and “Who are all those boys?”

“They’re my children,” the Rebbe answered with his characteristic simplicity. And it was 100% true.