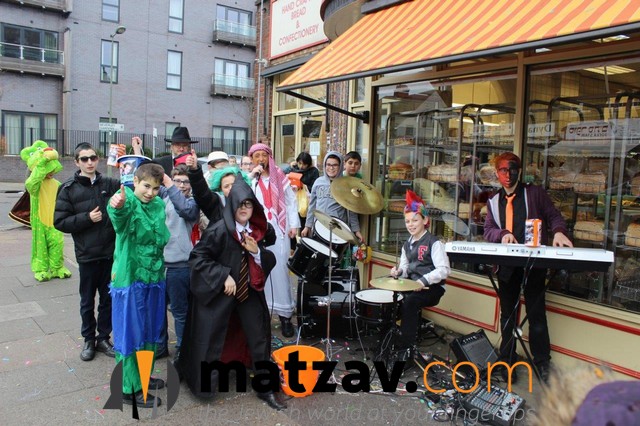 Purim is a time when we celebrate the miraculous salvation of the Jewish People; notice the word “we”, as it pertains to us as a whole, as a single entity, as a nation. Purim is when we celebrate our freedom and our salvation as a people, the Jewish people. We believe in unity and that every action and non-action of one Jew affects us all, for the good and the bad.

From a very young age, my parents instilled in me that middos are the ikur of Yiddishkeit. I was taught to treat others with respect and decency and to judge favorably.

There are two main branches of Judaism, the first, is “between man and God”, and the second, is “between man and man”. These two branches are of equal importance; however, the first, is a private relationship with an individual and God. This relationship is personal and is often compared to a marital relationship. Now, I ask, would you feel comfortable if everyone knew or inquired about the depths and privacies of the intimacy you share with your spouse? I am confident that the answer to that question is no. Similarly, the relationship we share with Hashem should only be examined or discussed at the will of that individual.

It seems much of Judaism has conformed to an obsessive  religion of outer appearance. For example, showing that you dress to the exact standards of your community has become a prime focus while allowing complete disregard for others for the way they dress. This perspective is a complete antithesis of  what Judiasm stands for. You are no better than your fellow Jew. We are all equally special regardless of how we practice. There is enough anti-semitism and hatred in the world. Why create discord and animosity between each other?

The concept of achdus has been drilled into our minds for centuries, but what does achdus really mean? We understand the concept, but the problem is that we don’t practice it. Achdus is living as one, in unity and in harmony. “Between man and man” needs to become just as much a part of us as “between man and God”.

This story I am about to share, I do so with great sadness and a heavy heart, but my intention in doing so is only to raise awareness and to educate those who are ignorant and lacking in the understanding of what it truly means to be a Jew.

I am a full time, first year law student, which leaves me little personal time. I decided to take the day off so I can celebrate the Holiday with full Simcha and joy. As the day came to a close, I left my home to head to a friend’s Purim seuda, which was about a 45 minute drive.

When I arrived, I exited the car with excitement, looking forward to my last few hours of Purim. As I stepped out of the car, I lit a cigarette for a quick smoke before I went in. I noticed a crowd of rowdy boys barely in their teens outside the house and was approached by one of them who said to me, “Girls can’t smoke!”

This child spoke with such confidence and assertion that what he was saying was permissible. When he said this to me, I noticed that he too, had a lit cigarette in his hand.

In a state of shock, I asked him, “What did you just say? Who are you to tell me what I can and cannot do?” In fear, the boy ran off. Shortly thereafter, I started walking up to the house where the rest of the boys were gathered. As I approached the top of the steps at the entryway of the house, all of the boys started yelling, “Shiksa! Get out of here! You shiksa!”

Now, I started wondering why my friends family would host such a disrespectful crew. Unbeknownst to me, I had gone to the wrong house. As I turned to walk away, embarrassed and shaken, one of the boys kicked me from behind. I turned around and asked which one of them kicked me. At this point, the owner of the house came outside and asked what was going on. I stated that I had ended up at the wrong house and that one of these children kicked me. His response was, ”Excuse their behavior, they’re a little high.”

The host stood there silently as they continued to berate and criticize me for being a female wearing pants and smoking. At this point, my blood was at its boiling point and I was ready to respond physically and violently. I took a second to compose myself and instead, I made the choice to take the opportunity to use my words. In a shaky and loud voice, I shouted, “You should be ashamed of yourself! This is why people are turned off from Yiddishkeit! Purim is a time of happiness and redemption! Where is your derech eretz? You are making a huge chilul Hashem! Who are you to judge me for the way I dress and the choices I make? You assume by the way I’m dressed that I’m not frum?”

With my head down and tears in my eyes, I walked to the car and found the correct address where I had a beautiful seuda.

I found out after that the owner of the house is a Rabbi in a high chinuch position at the local Bais Yaakov. The biggest problem is that there are people in the position of chinuch that stand by and do nothing to teach children to act with proper middos. Someone in a position of chinuch has more power than anyone in the world. They hold the power to inspire or to destroy a child with one word. This man who excused, justified, and in a sense encouraged these boys’ behavior is in a position of strong influence in the community. Moreover, his teachings impact the future of our people; children who are uneducated, sensitive, and vulnerable are being taught that this behavior is accepted. They are being taught that an 11 year old boy can get trashed and disrespect and embarrass a 30 year old woman with no ramifications or consequences.

I have suffered a tremendous amount on my journey through Judaism. Although I have explored in the past, I am currently religious and I believe in my religion strongly. I hope and pray that things can change and that we can live peacefully, in harmony with one another. No one is perfect, but our purpose is to strive for our own perfection and encourage others to be better in a kind and loving manner.