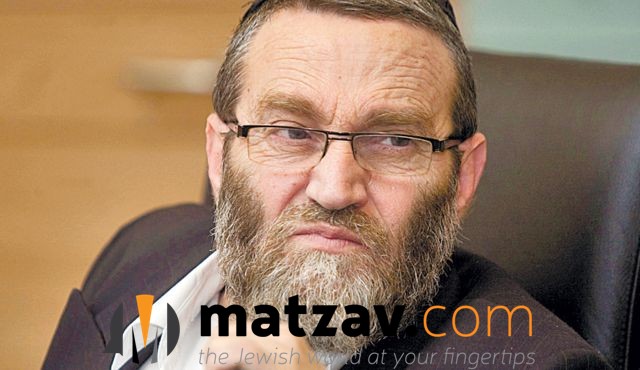 During a recent Knesset session, MK Moshe Gafni of UTJ attacked the government’s civil service for refusing to employ yeshiva alumni who had not studied for twelve years in regular schools. Gafni complained that a Gerrer chossid was rejected by the civil service even though the yeshiva where he studied for at least twelve years was fully recognized by the state.

At this point, Minister of Interior Security interrupted to ask Gafni if he represented Gur.

“Look, we all represent everyone,” Gafni replied.

“The bochur learned Rambam, Ritva, Rabbi Akiva Eiger, he learned the words of the gedolei olam who illuminated the world, and he’s considered like the loafers of the city’s streets,” Gafni complained. “This happened in a Jewish democratic state which gives lip service to integrating chareidim into the workplace.”

Gafni said that in a similar incident in the Transportation Ministry, the Transportation, Absorption and Tourism ministers agreed that twelve years in yeshiva was sufficient, yet the civil service still refused to accept such people.

“Why are you lying to us?” Gafni concluded. “Tell the chareidi public that you don’t want [integration].”

However, Haaretz reported that at the annual Eli Hurwitz Conference of Israeli economic policymakers, Bank of Israel Governor Karnit Flug said that per capita GDP in Israel is about 40% lower than that of the U.S., partially because chareidim and Arabs are less active in the labor force and less educated than other Israelis. She cited a Bank of Israel study which found that regarding job skills, seventeen years of chareidi education was equivalent to only ten years of regular education.

Meanwhile, despite Education Minister Naftali Bennett’s agreement to annul legislation from the government that was to forge a linkage between teaching of the Liba (core) curriculum at chareidi institutions to government funding from 2017 onwards, Bennett postponed a ministerial hearing on the matter at the last minute. He is trying to formulate a compromise instead of abandoning the plan altogether.