Hillary Clinton’s campaign rollout on social media set Twitter abuzz as she likely hoped, but part of the discussion quickly veered away from the candidate herself to her new logo, and it got a hearty “thumbs down.”

The blocky blue “H” with a horizontal red arrow running through it looked like a road sign pointing to a hospital, some said; it looked too similar to the logo for FedEx, others complained; it could easily be compared with a World War II-era Hungarian fascist party logo, a journalist for the Wall Street website Business Insider pointed out.

Worse yet for the would-be 2016 standard-bearer of the left-leaning Democratic Party: The arrow pointed to the right.

“So what lucky 3rd grader won the Design the Hillary Clinton Campaign Logo contest?” Tweeted a commentator with the handle @massfubar to nearly 14,000 followers. Read more at Yahoo News. 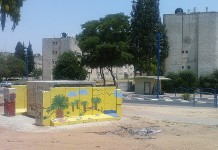 55,000 Students Miss School As Rockets Rain Down On Southern Israel