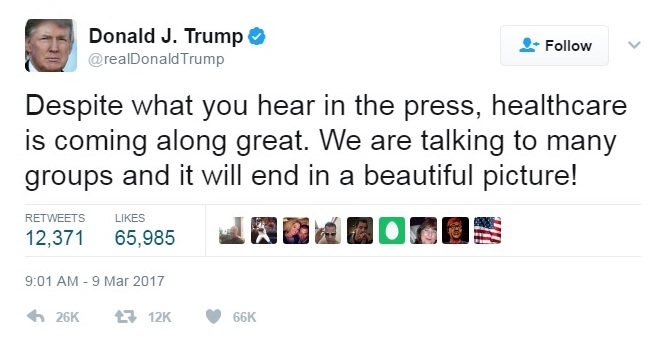 Two key House committees have approved a Republican proposal to revise the Affordable Care Act, giving the bill its first victories amid a backlash that both Republican leaders and President Donald Trump are trying to tamp down.

“Today, the House took a decisive step forward in fulfilling a promise to the American people that has been years in the making: repealing and replacing Obamacare with affordable, patient-centered reforms,” Energy and Commerce Chairman Greg Walden, R-Ore., said following the vote.

Amid a barrage of attacks from Democrats and criticism from health-care industry groups, Trump sought to calm fears about the process.

“Despite what you hear in the press, healthcare is coming along great,” he tweeted midday Thursday. “We are talking to many groups and it will end in a beautiful picture!”

“I think we need to know that,” McConnell said at a breakfast sponsored by Politico, adding that the CBO report could be released by Monday.

McConnell was the first in growing chorus of high-ranking Senate Republicans to question the wisdom of moving forward on the health bill without an official budget tally. Senate Finance Committee Chairman Orrin Hatch, R-Utah, whose committee will help craft a Senate response to the House legislation, told reporters on Thursday that he believes the CBO score is a valuable tool.

The comments came after the two House committees worked at breakneck speed through the night to advance the American Health Care Act. The accelerated pace has drawn criticism from Democrats, who contrasted it with the lengthy deliberations that took place before passage of the Affordable Care Act, as well as from some Republicans.

One of those Republicans, Sen. Tom Cotton, Ark., drew swift attention Thursday morning when he tweeted that the House should “start over.”

“House health-care bill can’t pass Senate [without] major changes. To my friends in House: pause, start over. Get it right, don’t get it fast,” Cotton wrote from his political account.

“GOP shouldn’t act like Dems did in [Obamacare],” he continued. “No excuse to release bill Mon night, start voting Wed. With no budget estimate! What matters in long run is better, more affordable health care for Americans, NOT House leaders’ arbitrary legislative calendar.”

In a Thursday afternoon interview with The Washington Post, Cotton threw more cold water on both the fast pace with which House Republicans are moving ahead on the bill and the measure’s substance, including the proposed tax credits to help people pay for insurance.

“I don’t think the Senate would vote on that bill,” he said. “The bill that was introduced Monday night cannot pass the Senate. And I don’t think it will be brought to the Senate for a vote.”

Cotton said many of his colleagues hold similar views. “They might not have spoken publicly about it, but I can tell you a number if not a majority of Republican senators think that this process has been too breakneck, too slapdash and they do not see a good solution for the American people coming out of the House bill as drafted.”

Cotton’s tweet added uncertainty to the bill’s fate in the Senate, should it pass the House. Four other GOP senators in states that accepted Medicaid expansion under the ACA, also known as Obamacare, have expressed concerns about changing the way the program is administered.

One of those senators, Rob Portman, Ohio, reiterated his concerns Thursday after meeting with Vice President Mike Pence and Health and Human Services Secretary Tom Price.

“That concerns me if it provides less certainty for the expanded Medicaid,” Portman said. “We’ll see.”

The measure also is taking fire on the right from Sens. Ted Cruz, R-Texas, Rand Paul, R-Ky., and Mike Lee, R-Utah, who say they want a more complete repeal of the ACA.

The most imminent threat GOP leaders must contend with comes from those conservatives. The speaker can lose only 21 Republican votes if the American Health Care Act is to pass, and opponents are promising to use that leverage to force changes to the bill.

Pence met with two Freedom Caucus leaders Tuesday, and that same day, White House Budget Director Mick Mulvaney – a former caucus member – spent more than an hour at a meeting of the group. Its members have also been invited to visit the White House next Tuesday.

On Wednesday night, Trump met with leaders from Americans for Prosperity, the Club for Growth, FreedomWorks, the Heritage Foundation and its political arm, Heritage Action, and the Tea Party Patriots as part of what the White House called his “full-court press” on the bill’s behalf.

On Capitol Hill Thursday, Ryan made a new attempt Thursday to explain the full scope of the GOP health plan, explaining in an unusual “TED talk”-style news conference that the pending legislation is only the first step.

The proposal, he explained, is to be followed by Trump administration regulatory actions, as well as additional legislation that will need to win at least some Democratic support in the Senate.

Senate Democrats expressed their concerns at a separate news conference, attacking the GOP for allowing the process to take place in the “dead of night” while flanked by people who had benefited from the Affordable Care Act.

Sen. Debbie Stabenow, D-Mich., who is up for reelection next year in a state that Trump narrowly won, contrasted the speedy handling of the bill to the process that led to the ACA, which involved 14 months of debate and hundreds of hearings.

On the other side of the Capitol, House Minority Leader Nancy Pelosi, D-Calif., accused Republican leaders of seeking to hide its effects from the public by advancing it quickly.

She highlighted a letter from four Republican committee leaders, including Ryan, sent in June 2009 demanding that the CBO issue an analysis of the Affordable Care Act before their panels voted on the measure. Ryan said this week that it was acceptable and not unusual for two of the same committees to take up the GOP legislation without a CBO analysis.

“The facts are these: We had scores of hearings,” Pelosi said. “Hours of public markup, dozens of Republican amendments accepted.

“They don’t want the American people to see the facts,” she added. “They’re always afraid of the facts.”

House Republican leaders have given little indication that they will make anything but marginal changes to their plan, which would eliminate the requirements that all Americans obtain coverage or pay a tax penalty and that businesses with at least 50 employees provide insurance. The American Health Care Act would replace income-based subsidies with refundable tax credits based on age and income, impose a 30 percent surcharge if people buy a plan after allowing their coverage to lapse and phase out the law’s more generous Medicaid funding over time.

These changes have sparked criticism from powerful health-care stakeholders. The American Medical Association, the American Hospital Association and AARP are among the groups that have rejected the bill.

America’s Health Insurance Plans, the insurance industry’s largest trade association, sent a letter Wednesday saying that although it appreciated some elements of the plan, the proposed changes to Medicaid could produce “unnecessary disruptions in the coverage and care beneficiaries depend on.”

Andrey Ostrovsky, the chief medical officer for Medicaid, took the unusual step of expressing his opposition to the measure Wednesday night.

“There’s a pretty big medical-industrial complex in America,” he said. “And when you touch it, I’ve discovered, it touches back.”