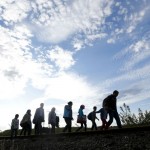 Britain joined the European effort on Monday to deal with the arrival of thousands of migrants, pledging to take in 20,000 Syrian refugees from camps in Jordan, Lebanon and Turkey over the next five years.

The new refugees in Britain will be given “human protection” visas upon arriving, Cameron said.

The news follows French President Francois Hollande’s announcement that his country would welcome 24,000 asylum seekers over the next two years while Germany’s Chancellor Angela Merkel vowed to designate 6 billion euros to deal with the migrant crisis.

The United Nations refugee agency has estimated more than 310,000 people have crossed the Mediterranean with the aim of reaching Europe this year. Read more at the New York Times.