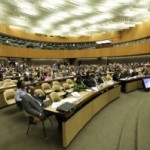 In one of the resolutions, the U.N. condemned Israel for retaining the northern Golan Heights region, demanding that Israel hand that territory to Syria. Another resolution urged Israel to end its “occupation” of the Palestinian territories and invoked the Palestinians’ right to self-determination. Six nations—Israel, United States, Canada, Marshall Islands, Micronesia, and Palau—voted against the measures, with four countries abstaining.

“It’s astonishing,” said Neuer. “At a time when the Syrian regime is massacring its own people, how can the U.N. call for more people to be subject to [Syrian President Bashar] Assad’s rule?”

Neuer added, “What is also outrageous is that these resolutions claim to care about Palestinians, yet the U.N. proves itself oblivious to the hundreds of Palestinians who continue to be slaughtered, maimed and expelled by Assad’s forces.”

The U.N. has a longstanding reputation of disproportionate criticism of Israel.