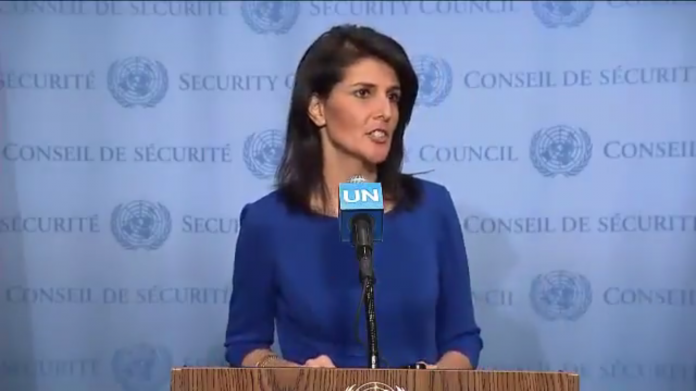 President Donald Trump, who has famously called climate change a “hoax,” does believe the climate is changing and that humans have a role in it, U.N. Ambassador Nikki Haley told CNN’s Jake Tapper.

“President Trump believes the climate is changing and he believes pollutants are part of the equation,” Haley said in an interview on “State of the Union,” which will be fully aired Sunday.

“The rest of the world wanted to tell us how to do it, and we’re saying, we will do it, but we will do it under our terms.” She said Trump pulled out of the pact “because it wasn’t possible to meet the conditions” under the pact agreed to under President Barack Obama.

Her remarks come amid global criticism of Trump for withdrawing from the United States from the Paris climate pact, which was ratified by nearly 150 countries who agreed to curb carbon emissions to mitigate global warming. Coal-fired power plants in the United States, as elsewhere, would have to have meet environmental standards under the pact.

Trump has made contradictory statements about what exactly he believes amid mounting pressure from other world leaders, the scientific community and even Pope Francis, who has urged urgent action to change human activity causing harm to the environment. The president has said flat out that climate change is “nonexistent” but also at different times hedged his answer, and said there could be some connection to human activity.

Haley, the former South Carolina governor who Trump appointed to the United Nations post, was asked to elaborate on the president’s thinking and told Tapper “He knows that it’s changing and that the U.S. has to be responsible for it and that’s what we’re going to do.” She said the U.S. pulled out of the Paris pact because the rules hurt U.S. businesses.

“Just because the U.S. got out of a club doesn’t mean we aren’t going to care about the environment,” she said.

During Friday’s daily press briefing, both White House Press Secretary Sean Spicer and Environmental Protection Agency chief Scott Pruitt said that they had not had a discussion with the president on his views on climate change and could not answer questions about what the president thought.

“I was elected to represent the citizens of Pittsburgh, not Paris,” Trump said during his announcement that he was pulling out of the pact. And though some Trump supporters carried “Pittsburgh not Paris” signs outside the White House Saturday, the mayor of Pittsburgh denounced the president’s move to abandon the global pact meant to safeguard the environment.

In response to Trump’s withdrawal from the pact, former New York Mayor Michael Bloomberg also pledged to pay up to $15 million to support the U.N. agency that helps countries implement the agreement.

“Americans will honor and fulfill the Paris agreement by leading from the bottom up – and there isn’t anything Washington can do to stop us,” said Bloomberg, who appeared Friday with French President Emmanuel Macron and Paris Mayor Anne Hidalgo.