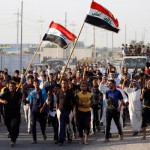 A senior United Nations official on Wednesday said millions of Iraqi children are at risk of becoming a “lost generation” due to persecution by the Islamic State terror group.

“We’re at risk of losing a generation through the lack of education, health, and protection,” Peter Hawkins, UNICEF’s (United Nations Children’s Fund) Representative in Iraq, told the Thomson Reuters Foundation, a U.K.-based charity.

Nearly 14,000 teachers have fled northern Iraqi territory that is now controlled by Islamic State. Almost one in five schools there have been damaged or destroyed, or are being used for other purposes, Hawkins said.

UNICEF and Iraq’s health ministry have vaccinated 600,000 Iraqi children against measles and polio this year, but Hawkins said that progress for providing access to humanitarian aid is “very, very slow.”