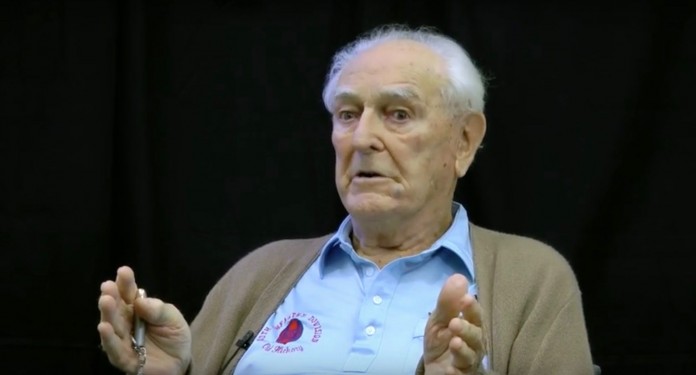 A U.S. officer who helped liberate 2,500 Jews during the Holocaust has died at the age of 99.

On April 7, 1945, Lt. Frank Winchester Towers, who was the division liaison officer of Regiment 743 of the 30th Infantry Division of the U.S. Army during World War II, approached (with his regiment’s tanks) a stopped train in which there were 2,500 Jewish prisoners bound for the Theresienstadt concentration camp in Czechoslovakia. The Nazis stopped the train because they were ordered to destroy it and drown the passengers in the Elbe river.

When the U.S. regiment approached, the passengers shouted, “We’re Jews!” Towers helped his regiment rescue the prisoners by mobilizing ambulances and other vehicles, and helped the freed prisoners get to an American-run field hospital.

“I feel pride and joy to know I had a small part in their release,” Towers told Yedioth Ahronoth in 2010. “They rose from the ashes like the phoenix.…It warms my heart,” said Towers, who also took part in the invasion of Normandy and helped liberate Jews from a labor camp near Magdeburg.

In 2011, Towers visited Israel, where he met 55 of the 700 children who were rescued from the train to Theresienstadt. Later, he was able to contact 226 survivors from that train. He has spent his later years speaking at Holocaust events throughout the U.S.

WATCH AN INTERVIEW WITH TOWERS: