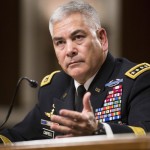 The U.S. commander of coalition forces in Afghanistan, General John F. Campbell conceded to a Senate committee Tuesday that the airstrike that hit a hospital over the weekend was called by U.S. Special Operations Forces—not their Afghan allies, as the U.S. previously claimed.

“To be clear, the decision to provide (airstrikes) was a U.S. decision, made within the U.S. chain of command,” Campbell said. “The hospital was mistakenly struck. We would never intentionally target a protected medical facility.”

At least 22 people died at the medical clinic operated by Doctors Without Borders. Campbell also said Afghan forces will not be able to secure the country on their own next year. Read more at The Guardian.