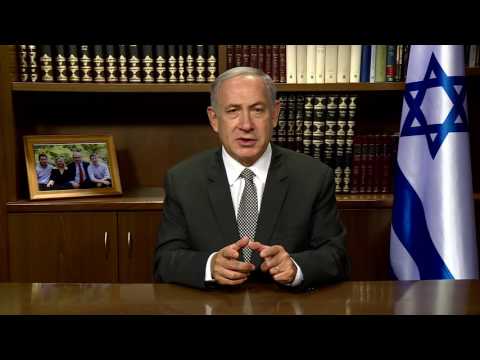 Netanyahu asserted that the Palestinians would not allow Jews to live in a future Palestinian state.

In his video Netanyahu said any demands that Jews leave their West Bank settlements was “outrageous.”

“It’s even more outrageous that the world doesn’t find this outrageous,” Netanyahu said. “Some otherwise enlightened countries even promote this outrage.”

As could be expected, the Obama administration lased out against Netanyahu.

“We obviously strongly disagree with the characterization that those who oppose settlement activity or view it as an obstacle to peace are somehow calling for ethnic cleansing of Jews from the West Bank,” Trudeau said.

“We believe that using that type of terminology is inappropriate and unhelpful,” she said.

In the video, Netanyahu speaks in English (with Arabic and Hebrew subtitles available).

The video was released around 3 p.m. Friday in Israel, just a few hours before Shabbos and on the day that marks Muslim holidays.

Netanyahu begins: “I am sure many of you have heard the claim that Jewish communities in Judea Samaria, the West Bank, are an obstacle to peace. I’ve always been perplexed by this notion.”

The Jewish communities he refers to are the 200-plus Jewish settlements in the West Bank, home to about 400,000 residents, including many American Israelis.

Netanyahu continues: “No one would seriously claim that the nearly 2 million Arabs living inside Israel – that they’re an obstacle to peace. That’s because they aren’t. On the contrary.”

Arabs, mostly Muslim, make up more than 20 percent of the Jewish state.

“Israel’s diversity shows its openness and readiness for peace,” Netanyahu says in the video. “Yet the Palestinian leadership actually demands a Palestinian state with one precondition: no Jews.”

“There’s a phrase for that: It’s called ethnic cleansing,” he says.

Netanyahu appears to be referring to a 2013 statement by Palestinian Authority President Mahmoud Abbas.

“In a final resolution,” Abbas told Egyptian journalists three years ago, “we would not see the presence of a single Israeli – civilian or soldier – on our lands.”

In his video, Netanyahu asked: “Would you accept ethnic cleansing in your state? A territory without Jews, without Hispanics, without blacks? Since when is bigotry a foundation for peace?”

The prime minister concluded: “Ethnic cleansing for peace is absurd. It’s about time somebody said it. I just did.”

Why did Netanyahu issue this video now?

One of his spokesmen, David Keyes, said Netanyahu was not responding to any recent statements by the Palestinian leadership.

In recent weeks, there has been a lot of chatter about a possible meeting between Netanyahu and Abbas in Moscow, brokered by Russian President Vladimir Putin.

Russia’s Interfax news agency reported that the two parties agreed “in principle” to meet but with no set date. This is a little like saying the sun will rise tomorrow. The Israelis and Palestinians are almost always ready, in principle, to meet. The devil is in the details.

But maybe something bigger is brewing?

Robert Danin, former senior U.S. State Department official and peace negotiator, told The Washington Post: “My sense is that by saying there will be ‘no ethnic cleansing of Jews’ in the West Bank, Netanyahu is positioning himself for possible future negotiation with the Palestinians. While showing he is tough, he is also trying to establish a principle: Just as there have been and will continue to be Arab citizens of Israel, so too should there be the right for Jews to remain in a future West Bank state.”

Danin said, “All this allows him to both solidify his right wing base, but also reach out to the center in Israeli politics that wants a two-state solution.”