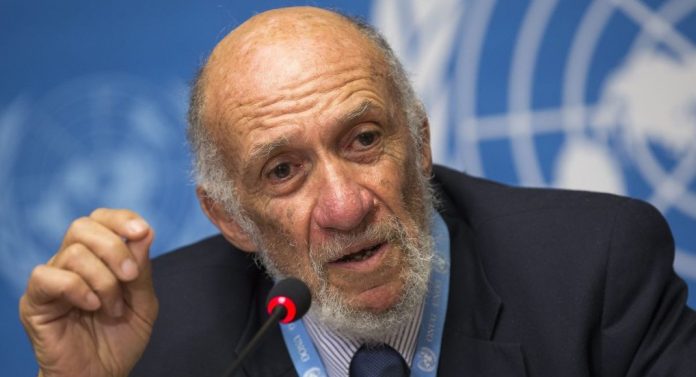 The United States expressed outrage on Wednesday over a report published by the UN Economic and Social Commission for Western Asia (ESCWA) that accused Israel of establishing an “apartheid regime” that “dominates the Palestinian people as a whole.”

“That such anti-Israel propaganda would come from a body whose membership nearly universally does not recognize Israel is unsurprising,” American UN Envoy Nikki Haley said in a statement. “That it was drafted by Richard Falk, a man who has repeatedly made biased and deeply offensive comments about Israel and espoused ridiculous conspiracy theories, including about the 9/11 terrorist attacks, is equally unsurprising.”

“The United Nations Secretariat was right to distance itself from this report, but it must go further and withdraw the report altogether,” Haley went on to say. “The United States stands with our ally Israel and will continue to oppose biased and anti-Israel actions across the UN system and around the world.”

Israeli Ambassador to the UN Danny Danon stated, “The attempt to smear and falsely label the only true democracy in the Middle East by creating a false analogy is despicable and constitutes a blatant lie.”

“Friendly advice — don’t read it without anti-nausea pills,” he tweeted.

Reuters quoted UN spokesman Stephane Dujarric as saying that the publication of the report was not coordinated with the UN Secretariat.

“The report as it stands does not reflect the views of the secretary-general (Antonio Guterres),” Dujarric clarified.

The ESCWA is headquartered in Beirut, Lebanon and is comprised of 18 member states from the Middle East and North Africa.

Last month, Haley drew warm praise from the pro-Israel community in both the US and abroad after taking the UN Security Council to task for its double standards when it comes to its treatment of the Jewish state.

“I am here to underscore the ironclad support of the United States for Israel,” Haley told reporters after taking part for the first time in a monthly Security Council meeting on Middle East issues. “I’m here to emphasize the United States is determined to stand up to the UN’s anti-Israel bias. We will never repeat the terrible mistake of Resolution 2334 and allow one-sided Security Council resolutions to condemn Israel. Instead, we will push for action on the real threats we face in the Middle East.”