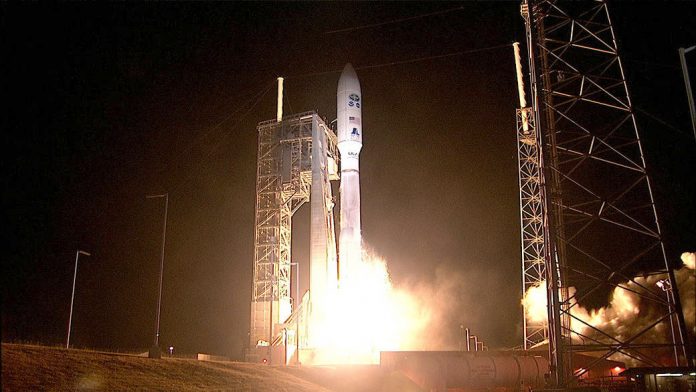 When GOES-R arrives at orbit, it will see hurricanes and blizzards with higher resolution than any other U.S. satellite of its kind. The scans will take less time and be transmitted faster. Severe storms will be more predictable through breakthrough lightning mapping.

The weather satellites that silently monitor the atmosphere over North America are approaching the end of their life spans. If they fail, the United States will be left without critical weather data. Scientists at NOAA and NASA have been warning of this risk for years. In the late 1990s, they began designing instruments for the next generation of satellites.

GOES-R, the first in the new series to launch, will join a large constellation of U.S. satellites – operated by NOAA, NASA and the Department of Defense – that observe our planet’s weather and environment.

It is a game-changer for weather forecasting, but it’s also part of a bigger picture. GOES-R joins an international network of satellites that share data freely among nearly 200 countries. The United States provides data to other nations so they can generate precise forecasts and alert people to prepare for weather events. In turn, those countries share their data with the U.S. National Weather Service.

Advance notice of crippling blizzards, long-range hurricane forecasts – even a severe thunderstorm outlook – is possible because of the freely-provided weather data from Europe, China and Russia. It is a mutual understanding based on an unspoken tenet: Our well-being is important, and so is yours, and we can’t do this without one another.

The notion of sharing weather information dates to the late 1800s, when the knowledge was essential for maritime activity. More than a century later, an unfathomable amount of weather data is shared among 191 governments as members of the World Meteorological Organization, or WMO, an agency of the United Nations. The organization’s role became crucial after the United States launched the first weather satellite in 1961 and other countries followed suit.

“That’s one of the big things that’s changed in my lifetime,” said Richard Rood, a professor of atmospheric science at the University of Michigan. “The U.S. was originally the only global network, and then the Europeans, Japan and India all started launching their own satellites. We had to develop a data-sharing agreement.”

The international Space Age prompted WMO leaders from the United States and the U.S.S.R. to create a World Weather Watch program that allows any country to receive any meteorological data it needs to protect life and property. Global satellite data is critical to that objective. It is the backbone of forecast models, or numerical weather prediction. More than 90 percent of the data ingested by the models comes from satellites around the world.

“People don’t think about why forecasting has improved,” said Cliff Mass, a professor of meteorology at the University of Washington. “If you look at the revolutions that made forecasting possible, numerical weather prediction is one of them, and satellites were the other.”

They measure how the atmosphere is flowing – its wind speed and direction – based on how clouds move over time. They can see long-wave radiation escaping from the ground and oceans, which is directly related to the temperature and moisture through the depths of the atmosphere. That information, along with “ground-truth” observations from thermometers and weather balloons, is used as a starting point for the forecast. And it can be used to nudge the model back to reality if it gets off-track.

Perhaps the most significant recent example of the satellite network’s role in weather forecasting was Hurricane Sandy in October 2012. After the storm took a disastrous left turn onto the East Coast, researchers at the European Centre for Medium-Range Weather Forecasts sought to determine how critical satellites were to its accurate prediction. Without the information from polar-orbiting satellites, which can observe the entire globe in 24 hours, the forecast “would have given no useful guidance 4-5 days ahead that the storm would make landfall on the New Jersey coast,” the study concluded.

“This goes beyond simply forecasting for the public,” said Rob Masters, the director of external relations for the WMO. “It’s a key source for long-term forecasting and in various sectors of our economy, the environment, health and transportation of all kinds.”

There have been times when nations have threatened leave the partnership, said Rood, a consultant for the National Weather Service’s next generation forecast who’s been involved in weather and climate modeling for decades. Eventually, he said, governments would realize how severely it would degrade their forecasts.

“When I was working at NASA, every now and then some country would say they wanted to pull out their (weather balloons),” Rood recalled. “We would do experiments to look at the impacts, and also to show the impacts if we pull ours back, too. If you start withholding, you don’t just punish them or us, you punish everybody.”

The WMO nations don’t just share data – they also have a history of sharing spacecrafts.

In 1989, the satellite that monitors the East Coast failed, leaving NOAA with just one satellite over the Pacific Ocean. Replacements for the aging satellites were in the works, but the project was years behind and millions of dollars over budget. So in 1993, the Europeans moved one of their Atlantic ocean satellites farther west to fill the gap.

The year before, that same European satellite had been able to help meteorologists track and forecast the deadly Hurricane Andrew, which devastated Florida.

And the courtesy extends in both directions. Before joining WMO, Masters worked in the satellite division of NOAA. He recalled that in 2002, the United States lent its GOES-9 satellite to Japan after their west Pacific satellite began run out of fuel.

“They had a failure, and they were blind,” Masters said, “so we worked it out so one of our satellites could move over there.”

With the addition of GOES-R, the United States will have four satellites parked over the Atlantic and Pacific oceans to monitor weather in North America. But the new generation bears only slight resemblance to the old.

The “camera” instrument on GOES-R – called the Advanced — doubles the resolution of the current NOAA satellites. It can scan the whole hemisphere in five minutes, and if there’s a particularly dangerous weather pattern approaching, forecasters can scan a smaller region over the United States every 30 seconds.

Sudden bursts of lightning could mean thunderstorms are becoming severe. So, GOES-R has a lightning mapper to continuously monitor and transmit all of the lightning strikes across North America and the surrounding oceans.

All of this data will be fed into weather models to improve forecast accuracy. It could extend the lead time of tornado warnings and predict the location of flash flooding before it begins. In other words, it could save more lives not only in the United States, but abroad.

GOES-R is expected to go live in 2017. When it does, it will feed critical, lifesaving data into National Weather Service forecasts. It will also enter a decades-long tradition of international cooperation and humanitarian goodwill.

“This is probably the most complex technology that our species is involved in – weather prediction is,” Mass said. “And we do it together as one species. It’s one of our greatest successes.”