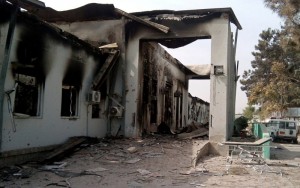 U.S. special forces knew the target bombed in Kunduz, Afghanistan, was a hospital, according to a new report from the Associated Press.

Soldiers tracked a Pakistani intelligence operative suspected of working with the Taliban to the protected medical facility run by Doctors Without Borders, also known by its French initials MSF. U.S. forces had assembled a dossier on the area, including maps showing the facility was a hospital.

“This would amount to a premeditated massacre,” a MSF official told AP of the Oct. 3 attack that killed 22.

It is unclear if U.S. forces told their commanders the target was a hospital before an AC-130 gunship opened fire. A U.S. account from the scene claimed gunfire was coming from the hospital, but Afghans and MSF say that was not the case. Read more.