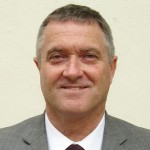 A photograph of UK Consul General to Jerusalem Alastair McPhail was released in which the diplomat appears wearing a keffiyeh scarf with the map of Israel entirely covered with a Palestinian flag. The map includes Judea, Samaria, and Gaza.

The website of Islamic Relief Palestine published the photo, headlined “British Consulate visits Islamic Relief in Gaza.” The photo was taken earlier this year when McPhail visited a new laboratory at Gaza’s Al-Azhar University, in a trip co-sponsored by the British government.

The conservative website Breitbart.com attempted to contact the British government for a response regarding one of its diplomats wearing an image that advocates for the destruction of the Jewish state. The inquiry “was met with a pro-forma response about the two-state solution, largely ignoring our line of questioning about the appropriateness of the scarf,” the website said.

“Someone who is expressing such views has no place in supporting the government or civil service of the day. The whole purpose behind the peaceful solution is to promote two states side by side. Wiping one state off the face of the map hardly fits with this aspiration,” Member of the U.K. Parliament Bob Blackman told Breitbart.com.