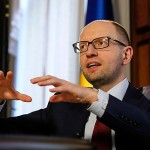 In some of the strongest language he has yet used in a war of words between the former Soviet neighbors, as both sides have deployed troops close to their frontier, Yatseniuk accused Moscow of acting like a “gangster” supporting “terrorists.”

“It is clear that Russia’s goal is to wreck the election in Ukraine, remove the pro-Western and pro-Ukrainian government and occupy Ukraine politically as well as military,” added the premier.

Yatseniuk took office in February after pro-European protests prompted the Kremlin-backed president to flee to Russia.

Ukraine plans to hold an election to replace Viktor Yanukovich on May 25, but the Russian-speaking east of the country has been disrupted by pro-Moscow militants who have taken over the city of Slaviansk and public buildings elsewhere, demanding to follow Crimea into being annexed by Russia.

Russia denies involvement but has denounced the Ukrainian government, which it says is illegitimate and backed by “fascist” Ukrainian nationalists, and has threatened to move in to protect ethnic Russians and Russian-speakers in Ukraine. Ynet