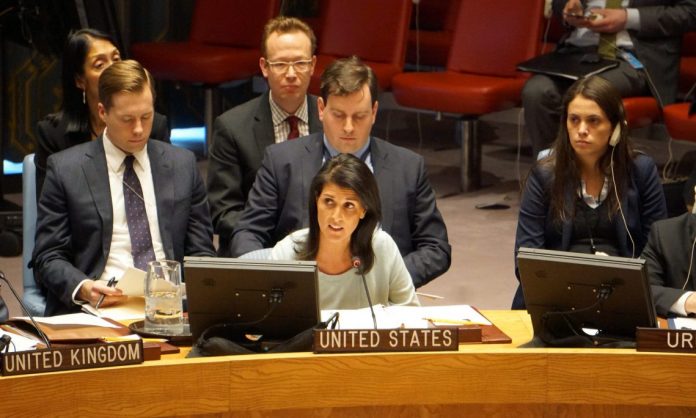 The US ambassador to the UN, Nikki Haley, spoke out forcefully against the atrocities committed by President Bashar al-Assad in Syria on Monday, during a visit to the US Holocaust Memorial Museum in Washington, DC with a delegation of UN Security Council diplomats.

“We must always remember the victims of genocide and honor their memory, and we must stand against the atrocities of today,” Haley said, after the delegation toured a special exhibit devoted to the ongoing war in Syria. “Sadly, arbitrary detention, torture, and forced disappearance are some of many atrocities the brutal Assad regime is committing against its own people. The international community — including and especially the Security Council — must take a stand against the regime and use all available tools to help the Syrian people.”

Earlier in the day, Haley led the diplomats on a visit to on a visit to Joint Base Anacostia-Bolling in Washington, DC, where they viewed missiles and other weapons supplied by Iran to Shia Houthi insurgents in Yemen. “We believe what the council saw today makes it clear that the evidence continues to grow that Iran is blatantly ignoring its international obligations,” Haley said.

The delegation was told by President Donald Trump over lunch at the White House that the “United Nations Security Council, in particular, is very important to us.”

“The power and the respect that it has all over the world is very, very excellent,” Trump said.

Trump noted that the delegation “has seen the missiles from Iran, and they’re looking at some of the atrocities taking place in Syria.”

“There’s much work that we have to, together, do,” Trump told the group.