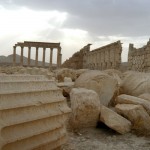 Satellite images confirmed ISIS militants have destroyed the 2,000-year-old Temple of Baal in Syria’s ancient Palmyra city, the United Nations said on Monday. UN training and research agency UNITAR provided satellite images from before and after an explosion in the Roman-era structure in the central desert city on Sunday.

The UN imagery contradicted earlier reports that suggested the temple was still standing after an ISIS attempt to blow it up.

The image from August 27 shows a structure surrounded by columns compared with a photo taken on Monday showing the destruction with just a few columns in the exterior part of the ancient ruins. The blast comes after ISIS militants destroyed the smaller Baalshamin temple at Palmyra last week. Read more at the Washington Post.