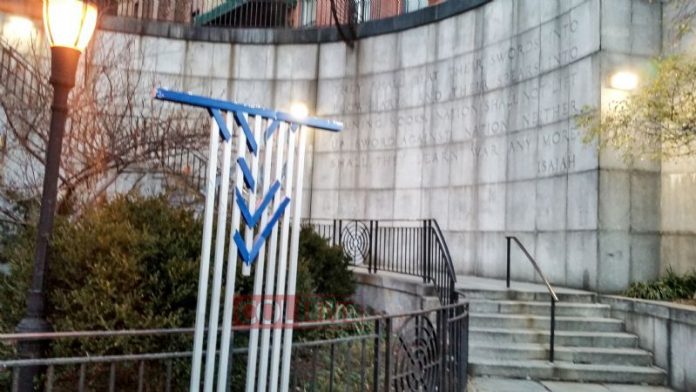 The UN Menorah across from the United Nations in New York was found vandalized before lighting last night, NYPD is investigating.

The UN Menorah at the Isaiah Wall across from the United Nations in New York was found damaged by Rabbi Yakov Dovid Cohen, director of institute of Noahide Code UN NGO, as he came to light the menorah at around 4:30 P.M.

When Rabbi Cohen arrived on December 13, 2017 to light the Menorah, he found the Menorah damaged on all sides with one of the Menorah’s steel beams cracked.

The menorah was made by the Michael and Bonnie Berkowitz, the artists who also designed the Menorah at the 9/11 memorial at ground Zero. In fact, the damaged Menorah was in the shape of the twin towers.

Michael and Bonnie Berkowitz, the engineers of the Menorah examined the damage and believe that “due to the center steel beam being broken it is an act of vandalism.”

The Ukrainian ambassador, Mr Volodymyr Yelchenko, proclaiming his shock that “people can possibly do something like this in front of UN headquarters,” while the Uruguayan ambassador, Mr Elbio Rosselli, expressed his “sadness that at a time when they seek to light up the world full of darkness the menorah has been possibly vandalized.”

Police are treating the incident as an act of nature, believing the Menorah was damaged due to strong winds and are investigating an alleged eyewitness report who claimed that wind blew down the Menorah.