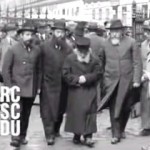 Yeshivos,Chadorim,Bais Yaakovs Join Together with Dirshu in Tefillah on Yahrtzeit of Chofetz Chaim

“Some 30 gedoleiYisrael representing the cross-section of Torah Jewry are slated to journey to Radin and daven at the kever of the Chofetz Chaim on his yahrtzeitthis coming 24 Elul/September 8. The news about this special tefillah journey has been enthusiastically received by Jews across the globe! All of Klal Yisrael is in dire need of the zechus of the Chofetz Chaim and the zechus of the tefillos that will be said at his kever,” said Rabbi Ahron Gobioff, Dirshu’s American Director.

Dirshu’s unique position as the movement that is organizing this special KlalYisrael event is illustrated by a fascinating story about the Chofetz Chaim himself. Rav Moshe Yosher, in his classic biography of the Chofetz Chaim (Volume III, p.887) writes: “The Chofetz Chaim was once struck by serious illness. He called his son-in-law, Rav Menachem Mendel Zaks and his nephew, Rav Mordechai Dov Roitblatt and asked them to journey to Vilna on his behalf and daven at the kever of the Vilna Gaon. He explained, “I still have somewhat of a zechus [that tefillos should be said on my behalf at the kever of the Vilna Gaon]. I wrote a sefer explaining the Gaon’s glosses on the Toras Kohanim.” Rav Yosher continues that indeed the tefillos were effective and the Chofetz Chaim recovered and lived for several years thereafter. The Chofetz Chaim would say that he believed it was those tefillos that helped him merit living to such a ripe old age.

“We Learn Your Torah!”

The Gemarah (Bava Metziah 85) teaches that when one of the Amoraim was ill he prostrated himself on the kever of his Rebbi pleading, “I learn your Torah!” He was healed.

Similarly, the Dirshu delegation led by numerous gedolim will go to the Chofetz Chaim’s kever and say, “Rebbi, we have come to tell you that tens of thousands of Yidden all over the world are learning your Mishnah Berurah and mussarsefarim daily. Please, in your zechus Rebbi, may KlalYisrael be saved from all gezeiros, both communal and individual and may all of us be inscribed for a new year of bracha,hatzlacha, yeshuos and refuos!”

Special tefillos will be recited on behalf of those who participate in the Daf HaYomi B’Halacha program or those who have pledged to join. They are indeed, the primary individuals who have the zechus to come before the kever and say, “We learn your Torah, please save us!”

In addition, Mosdos hachinuch all over the worldfrom yeshivos, chadarim and Bais Yaakovs have undertaken to recite special tefillos with heartfelt recitation of Tehillimjoining the hundreds of thousands of Jews who will be coming together in tefillah on the yahrtzeit. Whether located in Eretz Yisrael, North America, Europe, and even Australia and South Africa, numerous yeshivos and chadarim will all join KlalYisraelon the Chofetz Chaim’s yahrtzeitin storming the heavens with tefillos withan unprecedented koachharabbim in the zechus of the Chofetz Chaim

In His Grandfather’s Footsteps

HaGaon HaRav Chizkiyahu Mishkovsky, shlita, Mashgiach of Yeshiva Orchos Torah and a talmid muvhak of the senior Rosh Yeshiva, HaGaon HaRav Aharon Leib Shteinman, shlita, is one of the rabbanim joining the delegation. Rav Mishkovsky brings with him a rich history in this regard. He is a grandson of his namesake, Rav Chizkiyanu Yosef Mishkovsky, zt”l, the Rav of Krinik who, exactly 82 years ago, at the levaya of the Chofetz Chaimgave a hesped on the Chofetz Chaim in the very same place in Radin where the delegation will meet.

Rav Mishkovsky related, “The Chofetz Chaim bequeathed many great treasures to KlalYisrael, among them were two sparkling diamonds: the Sefer Mishnah Berurah and the Sefer Chofetz Chaim. Until now there were those who made the MishnahBerurah their primary interest and others who gravitated to the SeferChofetzChaim. Dirshu is the only organization that has brought both of them together and published special editions of each sefer thereby immeasurably enhancing the learning of both. They are the ones who can truly come to the kever of the Chofetz Chaim and say, “We learn your MishnahBerurah, we learn your Chofetz Chaim, please grant a shana tova u’mesukah for all lomdei Dirshu and all of Klal Yisrael.”

To join Daf HaYomi B’Halacha or to access a shiur near you please call 888-5-Dirshu. To have your name included in the tefillos at the kever of the Chofetz Chaimor to receive a copy of the  learning on the yahrtzeit of the Chofetz Chaim, please fax to 732-987-3949 or e-mail, info@kolleldirshu.org