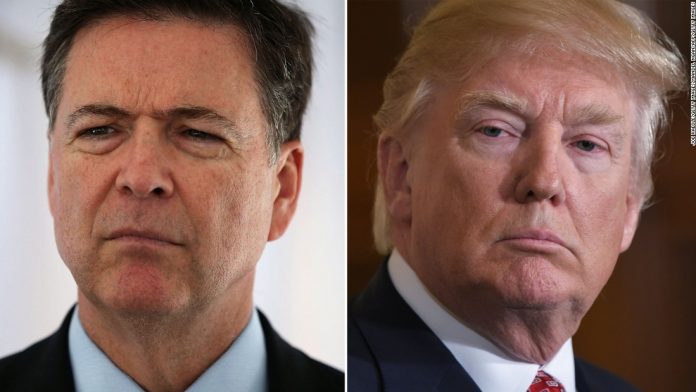 President Donald Trump on Friday lashed out at former FBI director James Comey on Twitter, calling him a “weak and untruthful slime ball” who deserved to be fired “for the terrible job he did.”

“It was my great honor to fire James Comey!” Trump wrote in his first remarks since advance copies surfaced of Comey’s upcoming book that includes blistering descriptions of Trump and his presidency.

In a pair of tweets, Trump accused Comey of leaking classified information and lying to Congress under oath. And Trump said Comey’s handling of an investigation into Hillary Clinton’s use of a private email server while secretary of state would “go down as one of the worst ‘botch jobs’ of history.”

Trump tweeted “James Comey is a proven LEAKER & LIAR. Virtually everyone in Washington thought he should be fired for the terrible job he did-until he was, in fact, fired. He leaked CLASSIFIED information, for which he should be prosecuted. He lied to Congress under OATH. He is a weak and…..

“….untruthful slime ball who was, as time has proven, a terrible Director of the FBI. His handling of the Crooked Hillary Clinton case, and the events surrounding it, will go down as one of the worst ‘botch jobs’ of history. It was my great honor to fire James Comey!”

Trump fired Comey in May 2017 in an act that has been under scrutiny by special counsel Robert S. Mueller III.