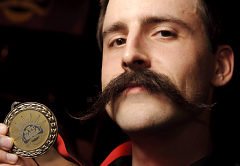 The facial hair had survived about two years of pushback from South Koreans, who viewed the mustache as a painful reminder of the style worn by colonial Japanese governors who ruled Korea from 1910 to 1945.

Harry B. Harris Jr. said he grew the mustache for his retirement as a Navy admiral and never meant any disrespect by the style of it.

But it wasn’t the pushback he received that led to its disappearance. He said he opted for a clean shave amid the rising summer temperatures.