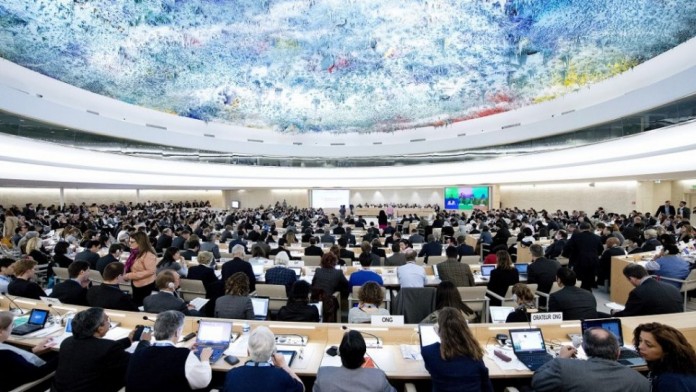 Yerushalayim – US Ambassador Samantha Power vigorously criticized the UN’s bias against Israel in her speech at the Israel Middle East Model UN Conference at the American International School in Even Yehuda.

“The UN can seem ineffective at best or a part of the problem at worst,” Ambassador Power told the students.

Ambassador Power elaborated upon the UN’s bias against Israel as a paradigmatic example of the UN falling short of its mandate.

“As you all know, the UN charter guarantees the equal rights of nations large and small,” noted Power.

“Yet, we have seen member states seek to use the UN Security Council, the General Assembly, and even the most arcane UN committees in ways that cross the line from legitimate criticisms of Israel’s policies to attempts to delegitimize the State of Israel itself,” continued Power.

The US Ambassador to the UN also pointed out that rogue regimes like North Korea do not receive anywhere near the amount of criticism received by Israel.

“The only country in the world with the standing agenda item at the Human Rights Council is not North Korea, a totalitarian state that is currently holding an estimated 100,000 people in gulags. It is not Syria, which has gassed lots of its people. It is Israel,” Power said.

Meanwhile, Israeli President Reuven Rivlin expressed gratitude for what he called Ambassador Power’s real friendship with Israel in a meeting with her earlier Monday.

“As US ambassador to the United Nations, you have served as a bridge between two important and crucial voices to the whole world,” Rivlin told Ambassador Power. “I am pleased to welcome you as a true friend who bridges gaps.”

President Rivlin asked that Power use her ability to bridge gaps for the good of discouraging the Palestinian Authority from making unilateral steps.

“I know that you will be meeting with the Palestinian leadership and I would like to convey a message to PA Chairman Mahmoud Abbas that he must understand that the tragic conflict between us, the Israelis and the Palestinians, can only be resolved through direct negotiations,” Rivlin stressed. “A solution cannot be imposed on either party.”

President Rivlin also expressed his appreciation for US support of joint ventures between Arabs and Jews in Israel, such as the high-tech hub that was inaugurated by US Ambassador to Israel Dan Shapiro in the Arab-Israeli village of Kafr Qasim located east of Tel Aviv.

“This is the way to restore confidence,” said Rivlin, referring to cooperation between Jews and Arabs in Israel. “Projects like this demonstrate to the world that we can cooperate and that we are destined to live together.”