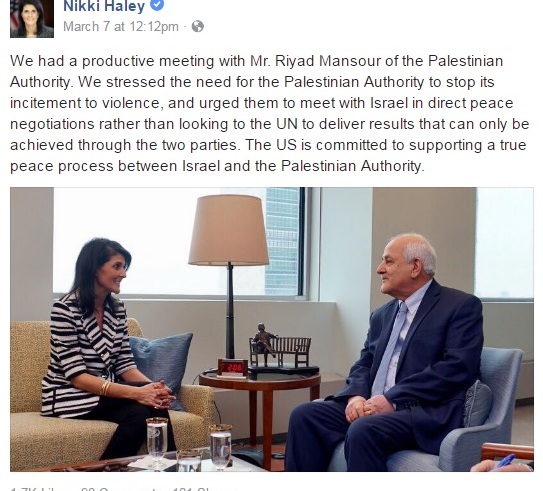 The Palestinian Authority must “stop its incitement to violence” and engage with Israel in “direct peace negotiations, rather than looking to the UN,” a top American diplomatic official said this week.

US Ambassador to the UN Nikki Haley made the statement after meeting with her Palestinian counterpart, Riyad Mansour — an encounter she described as “productive.”

“The US is committed to supporting a true peace process between Israel and the Palestinian Authority,” she said.

The head of France’s Jewish umbrella organization complained to the University of Pau about one of its faculty members, who…

Last month, Haley received warm praise from the pro-Israel community in both the US and abroad after taking the UN Security Council to task for its double standards when it comes to its treatment of the Jewish state.

Following her first meeting with Israeli Ambassador to the UN Danny Danon, Haley said, “Never again will our allies have to question our support.”