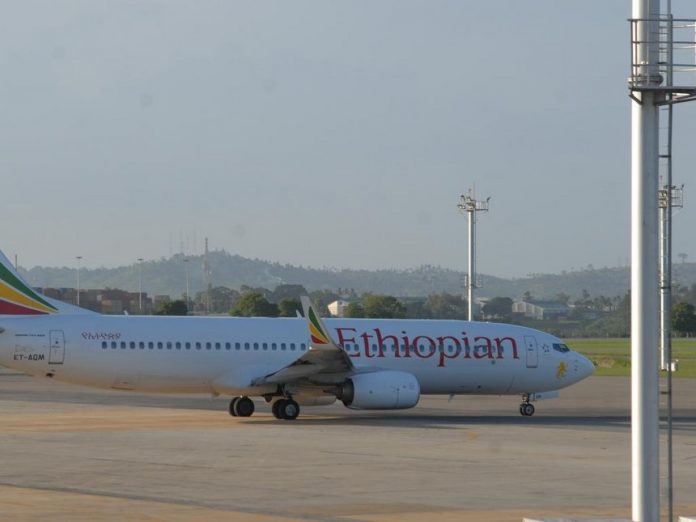 U.S. air safety officials are assisting in the investigation into the crash of a Ethiopian Airlines plane bound for Nairobi that crashed Sunday, killing all 157 people on board, including eight Americans.

Both the Federal Aviation Administration and National Transportation Safety Board will take part in the probe, officials said.

Though the flight did not originate in the United States, it was the second fatal crash recently involving a Boeing 737 Max 8 model. Boeing is based in Chicago. The same model aircraft was involved in the Lion Air crash in October. That plane crashed into the waters off the coast of Java, killing all 189 passengers and crew on board.

Although it was too soon to determine the exact cause of the Ethiopian Air crash, the plane, which was brand-new, showed a similar flight path to the one in the Indonesia crash.

An NTSB spokesman said the investigative agency is sending a team of four to assist Ethiopian authorities. Those individuals, including an accident investigator and others providing technical expertise, will serve as the investigative agency’s response team. The crews have expertise in systems, structures, power plants and operations, according to the safety body. NTSB says it is an “accredited representative” to the investigation because Boeing is a domestic manufacturer.

The group being sent to Ethiopia is smaller than a “go-team” that would be sent to a crash on U.S. soil, which could consist of a dozen to 25 people, but Ethiopian authorities are conducting a sweeping investigation of the crash.

The pilot, who was identified by relatives as senior Captain Yared Getachew, 28, of Addis Ababa, had family who reside in Northern Virginia and Texas. The airline confirmed Getachew was the pilot.

“We are deeply saddened by the news of the passing of our dear Yared,” the family said in a statement. “With his impeccable record as a pilot, he was one of the youngest in Ethiopian Airlines history to captain a Boeing 737. As a confident captain, his seniority at Ethiopian Airlines comes with an accomplished record of 8,000 hours flight time, and has made us incredibly proud of his achievements.”

The crash brought new scrutiny to Boeing’s 737 MAX family of aircraft, the latest generation of what the company describes as the “most popular jet aircraft of all time.” Boeing boasts the new model has an improved cabin and more advanced flying technology – including, for example, a sensor system meant to take over and correct the plane’s angle if it is pointed too far upward. But experts have warned that faulty sensors can put the aircraft at risk by sending it plummeting while in a climb.

Boeing issued an emergency notice after the Lion Air crash that said a malfunctioning sensor could “cause the flight crew to have difficulty controlling the airplane,” leading to “possible impact with terrain.”

The MAX 8, the variant that seats up to 210, has been involved in the two most catastrophic airline crashes in recent history.

It was too early to know what could come of the Ethiopian Airlines investigation, including what safety directives might be issued for the aircraft involved in the crash, officials said.

But the results of the probes could have major consequences because the 737 MAX is being rolled out widely across the aviation industry; Boeing says it was the fastest-selling airplane in its history and nearly 5,000 orders have been placed. Several hundred are in service, including with U.S. carriers Southwest and American Airlines. Southwest’s fleet is made up entirely of 737s and the airline had received 31 out of an order for 280 by January, according to Boeing. American had received 22 out of an order of 100.

A faulty sensor was cited in the Lion Air crash, though authorities have not yet completed their investigation.

Officials said the “angle of attack” sensor was the component involved in the Lion Air crash, causing the plane to dip whenever pilots attempted to adjust the plane’s pitch. The sensor repeatedly read that the plane was too high, even when it wasn’t, and sent it plummeting during repeated attempts to correct its course. The aircraft eventually crashed into the Java Sea. Preliminary data showed the Ethiopian Airlines flight following a similar flight path.

Ethiopian Airlines said its investigators, the Ethiopian Civil Aviation Authority and the Ethiopian Transport Authority will conduct the investigation “in collaboration with all stakeholders including the aircraft manufacturer Boeing” to determine the crash’s cause.

The Federal Aviation Administration issued a brief statement saying it was planning to assist in the investigation of the crash, which killed eight Americans and 18 Canadians.

“The FAA is closely monitoring developments in the Ethiopian Flight 302 crash early this morning,” the agency said in a statement. “We are in contact with the State Department and plan to join the NTSB in its assistance with Ethiopian civil aviation authorities to investigate the crash.”

Boeing declined Sunday to say whether the crash will prompt immediate action concerning the safety of the 737 MAX aircraft, as some pushed for answers on whether a second catastrophic crash will lead the manufacturer to ground its new planes or issue a new safety directive. More than a week after the Lion Air crash, Boeing issued a bulletin detailing the process for pilots to override the safety system cited in the crash.

The manufacturer said in a statement that it is “deeply saddened” by the deaths of the 157 aboard.

“We extend our heartfelt sympathies to the families and loved ones of the passengers and crew on board and stand ready to support the Ethiopian Airlines team,” Boeing said.

The company said it is sending a technical team to the crash site to assist U.S. and Ethiopian authorities in their investigation.