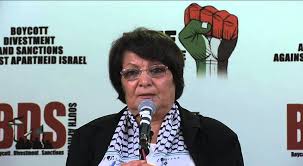 A US legal advocacy group announced on Thursday it was seeking legal action in Spain against Leila Khaled, the Popular Front for the Liberation of Palestine (PFLP) terrorist who participated in the hijackings of TWA  and El Al commercial airliners in 1969 and 1970.

The Lawfare Project (LP) — a New York-based legal advocacy organization working on national security issues — said that it had filed a criminal complaint with the National Court of Madrid.

The 73-year-old Khaled is scheduled to attend the “Revolution Means Life” book festival in Barcelona that begins on Friday.

Khaled was freed by the British authorities in 1970 as part of a prisoner exchange. She lives in the Jordanian capital of Amman and has traveled widely in Europe since the release of a fawning documentary about her in 2005, speaking at political rallies and cultural and literary festivals. At the same time, Khaled remains a member of the politburo of the PFLP, which is sanctioned as terrorist organization by both the US and EU.

A spokesman for the Barcelona City Council told the Jerusalem Post that Khaled was invited to Spain “by Festival Literal, an independent event. Barcelona City Council is not involved in the program of the festival and its not receiving her visit either.” The spokesman added that the festival does receive a municipal subsidy of 12,ooo euros, in common with similar cultural events in the region.

Those claims were contested by The Lawfare Project. “This book fair is sponsored by the City Council of Barcelona and four separate agencies of the council, despite the ban on providing financial support (and, specifically, public funds) — directly or indirectly — to designated terrorist groups or their leaders,” the LP said in a statement.

In a letter to the leading Barcelona newspaper La Vanguardia, pro-Israel advocate Giaco Ventura urged Gerardo Pisarello, the city’s deputy mayor, to demand the cancellation of Khaled’s visit. Ventura argued that Khaled’s presence would send a message to other world cities where terrorist attacks have taken place that Barcelona was indifferent to their tragedies.

On Monday, the Latin American broadcaster Telesur — which is close to the ruling regime in  Venezuela — reported that Khaled had begun a hunger strike in solidarity with Palestinian terrorists jailed by Israel.

“We must uphold the right of return, and the liberation of Palestine and the establishment of a democratic Palestine on the entire land of Palestine,” Khaled was quoted as saying. “To the heroes on hunger strike in Israeli prison, I join you in this strike from this moment.”