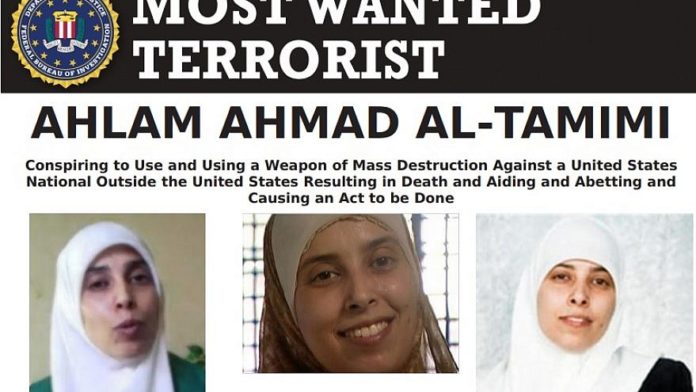 The U.S. may consider halting aid to Jordan in an effort to secure the extradition of Ahlam Aref Ahmad al-Tamimi, a Jordanian terrorist on the FBI’s Most Wanted list for her role in the suicide bombing at a Jerusalem pizzeria in 2001 that killed 15 people, including two American citizens.

Henry Wooster, nominee for the role of U.S. ambassador to Jordan, made the threat to withhold aid to pressure Jordan to extradite Tamimi in a written statement to the Senate Foreign Relations Committee, according to the AP.

“The United States has multiple options and different types of leverage to secure Ahlam Aref Ahmad al-Tamimi’s extradition,” wrote Wooster. “We will continue to engage Jordanian officials at all levels not only on this issue, but also on the extradition treaty more broadly. U.S. generosity to Jordan in Foreign Military Financing as well as economic support and other assistance is carefully calibrated to protect and advance the range of U.S. interests in Jordan and in the region.”

The extradition issue is likely to be raised this Wednesday when Jordan’s King Abdullah II is scheduled to speak to the Senate Foreign Relations Committee and House Foreign Affairs Committee via video to voice his opposition to Israel’s plan to extend sovereignty to the Jordan Valley and parts of Judea and Samaria.

Tamimi, who selected the target and drove the bomber there, was arrested by Israel weeks after the attack and sentenced to 16 life terms, but was released in the 2011 Israel-Hamas prisoner swap and moved to Jordan. She has appeared frequently in the media, expressing no remorse for her role in the deaths of innocent civilians.