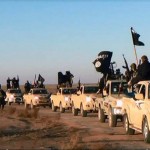 Army National Guard Specialist Hasan Edmonds, 22, and his cousin Jonas Edmonds, 29, have been arrested for allegedly conspiring to support ISIS, according to the Justice Department.

The complaint alleges that the younger Edmonds was planning to travel overseas to fight with the terrorist group, while his cousin was planning to attack a military base in northern Illinois. Hasan Edmonds booked a flight headed for Egypt on March 25, and was arrested at Chicago’s Midway Airport the same day. Read more about the case at Justice.gov.