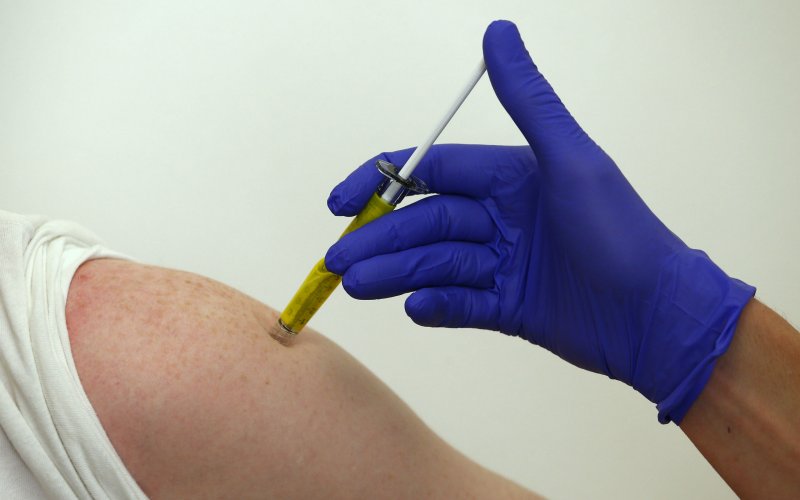 MAY 17th, 2016: The New York City health department confirmed they are investigating a chicken pox outbreak that has struck the Orthodox Jewish community in Williamsburg, infecting 75 people, mostly unvaccinated children, since March.

Three quarters of those stricken had not been vaccinated against varicella, the virus that causes the chicken pox rash. The rest had received one dose of the vaccine and hadn’t finished the course, according to the city.

Jennifer Rosen, the director of Epidemiology and Surveillance at the city’s Immunization Bureau, urged health care workers and families in the surrounding area to make sure they were up-to-date with receiving two doses of the varicella vaccine, which are 98 percent effective at preventing chicken pox. Complications of chicken pox include pneumonia, bacterial infection of the skin and soft tissues, meningitis, encephalitis, birth defects and death.

Vaccinations have become a constant source of debate and confusion, primarily stemming from a study published in The Lancet in 1998 by Dr. Andrew Wakefield and twelve coauthors, linking the MMR vaccine to autism. It was widely circulated and featured on 60 Minutes. However, the science behind the study was suspect, and over the years 10 of the 12 coauthors withdrew their names. In February 2010 The Lancet retracted the article, and in March 2010 Dr. Wakefield lost his medical license due to having acted irresponsibly.

Additionally, the main factor studied was Thimerosal, a mercury based ingredient that was used in vaccines. As of 2001 the Thimerosal was removed from almost all vaccines.

Nevertheless, there is still lingering confusion in the general population, and much misinformation being spread purporting that vaccines should not be given. This thinking has taken grip in many Orthodox communities, and unfortunately, over the years there have been outbreaks in Jewish enclaves of preventable diseases, such as mumps and measles. These diseases can be fatal, and/or have lifelong effects on the health of the diseased. In this article we will discuss vaccines from the point-of-view of Halacha.

There is a very clear commandment in the Torah to take preventative action to avoid danger. There is an obligation to build a Maakeh, railing, around a rooftop, or anywhere from which one can fall. This concept extends – on a Torah level – to include the requirement to be “exceedingly careful” to avoid all dangerous situations, food, and activities1.

There are many activities and foods that were prohibited by Chazal due to the possibility of danger, and the well-known adage that “Chamira SakantaM’Isura” – we are stricter with risk than prohibitions – underscores this.

There is some discussion in the Poskim as to the risk factor needed to be classify an activity as dangerous. According to all opinions if it is 50% or higher it is forbidden, and according to many, a significant risk such as a 10% risk is prohibited as well. Rav Moshe Feinstein זצ“ל is of the opinion that even a small chance of danger must be avoided.2

Rav Chaim Ozer Grodzinski זצ“ל wrote that although there is a rule of “Shomer Pesaim Hashem” – Hashem protects the unwise – which the Gemarauses as a rationale to allow engagement in certain risky behavior, that only applies when it is a distant and minor concern.3 Others write that the rule only applies when the concern is by and large disregarded and ignored.

Until now we have discussed avoiding existing dangerous situations. There is much less Halachic literature written about proactively protecting oneself from unsafe circumstances.

The most notable is the Rambam4 who describes healthy living as part of Avodas Hashem, and therefore includes eating, sleeping and exercise habits as part of the overall service to Hashem. The opinion of the Rambam (as understood by Rav Shlomo Zalman Auerbach זצ“ל) is that contemporary medical advice is to be the basis of what is considered healthy living.

There is also some discussion in the Poskim regarding healthy people fleeing a smallpox epidemic. The Rama5 and the Mishna Berura, quoting theShelah6, write that one must flee a town in which people are contracting smallpox.

Accordingly, it would seem clear that there is an obligation to take steps to prevent and avoid disease, and presumably vaccinations would be required as well.

However, vaccinations are somewhat different than fleeing a plague as they are not inherently risk free. There is a very small possibility that the person receiving the inoculation will get sick as well.

On the one hand, the risk factor of infection is statistically miniscule nowadays, due to the widespread use of vaccination. On the other hand, in order to perpetuate this, we must continue to inoculate until there is worldwide eradication of any given disease. Additionally, the risk factor of becoming ill from the vaccine itself is scientifically unproven or, at best, negligible.

Many Poskim conclude, that an individual cannot be compelled to vaccinate their children (putting aside legal or school policy concerns). This is the opinion of Rav Shlomo Zalman Auerbach and Rav Neuwirth.

The Nishmas Avraham qualifies this by saying, in the name of Rav Shlomo Zalman and Rav Neuwirth, that inoculations should be strongly encouraged. Indeed, all the above Poskim encouraged parents and doctors to vaccinate children.

In a much firmer stance, Rav Elyashiv זצ“ל, quoted by Rabbi Tatz in “Dangerous Disease & Dangerous Therapy”, says that all parents have an obligation to vaccinate as this is normative practice throughout the world, and is included in the parents’ basic obligation to care for their child. It would seem from the quote that he was very familiar with the scientific pros and cons and felt that until there was objective evidence to the contrary one must vaccinate to avoid danger; not vaccinating would be considered negligence on the part of the parent.

Additionally, Rav Elyashiv is quoted as ruling that parents of vaccinated children can insist that all other children in the class be vaccinated as well, so as to limit their exposure to disease.

There has been an ongoing discussion in Jewish communities across America as to whether schools can insist that all children be vaccinated. After perusing the various statements, proclamations and P’sakim that have been issued over the last few years, it seems clear that the minority opinions that do not support compulsory vaccinations are basing their P’sak, in part, on the fact that there is a portion of the medical community that is anti-vaccine, and the jury is still out on the issue. This is simply no longer true, and should be noted.

Additionally, it should be noted that none of the Rabbonim involved discouraged vaccinations, they just felt the schools cannot mandate them.

In some states where it is legally mandated to vaccinate your children, there is the option of a religious waiver, where one can state their religion is against vaccinations. In light of all that has been discussed, according to all opinions it would seem incorrect to use Judaism as the source for a religious exemption.

With some diseases, such as Polio, despite the fact that vaccinated children cannot contract polio, they can nevertheless still be carriers, and infect other unvaccinated people. In a 2013 outbreak, Israeli health officials promoted a vaccine which introduces a weakened live strain of the virus into an already inoculated child, who will not only not get sick, but also develop the ability to fight the virus and not be a carrier, thus helping to eradicate the virus completely.

Although there doesn’t seem to be any statistical risk to the child getting the live vaccine, they cannot come into close contact with immune-deficient people. They also don’t gain anything, and there are (unsubstantiated by me) rumors of a very minute percentage of these children becoming ill as well.

Something to think about, and if applicable discuss with your Rav.

May we merit the days when disease and illness will cease to exist.