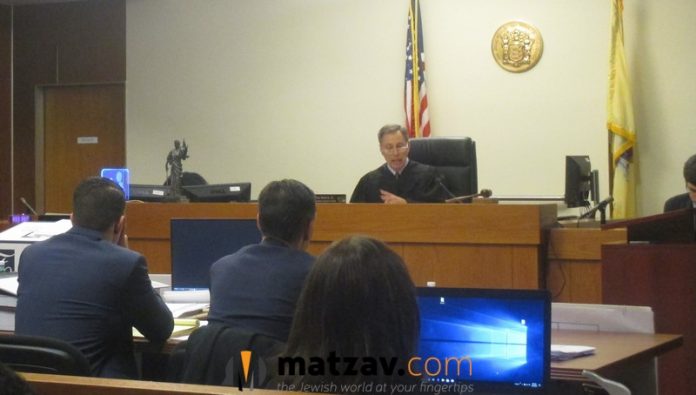 The verdict was handed down moments ago in the trial of the well-respected Rabbi Osher Eisemann, founder of the School for Children with Hidden Intelligence (SCHI), with the jury finding Rabbi Eisemann innocent on three of the four charges – counts 1,2 and 4 – including the most severe charge, corruption of public resources. There was a guilty charge on county 3, laundering, and corporate misconduct.

Middlesex County Judge Benjamin Bucca presided over the case at the courthouse in East Brunswick, NJ.

All counts against the school’s fundraising foundation were dismissed.

The jury, comprised of fourteen jurors, five men and nine women, came to their decision after beginning their deliberations on Friday.

The sentence won’t be handed down until April 29, two days after Pesach.

The defense is expected to file a motion, based on the jury’s decision, to dismiss the case altogether.

The following is an audio clip from Friday morning’s session of Rabbi Eisemann attorney Lee Vartan telling the judge this very concern, as the judge prepared the “jury charge”, which are the instructions to the jury. LISTEN:

Jail time is still on the table, but there is a possibility that the penalty could be strictly pecuniary.

The School for Children with Hidden Intelligence began in a Route 9 storefront in 1995 with just five students. For Rabbi Osher Eisemann, creating such a school was personal – he needed a school for his special-needs son that would stop at nothing to help him succeed. The school quickly grew, with 18 students in 1998, 130 in 2010, and over 500 currently. Concurrent with its growth, its acclaim spread far and wide as well. Despite his natural aversion to fame and the limelight, Rabbi Eisemann was given numerous awards and honors, and the steady stream of praise from parents and visitors alike continued to increase.

Right from the start, SCHI stood out. The school raised the bar in special-needs education. Every means available was utilized to ensure that each child would exceed expectations. The school also placed great emphasis on maintaining a low teacher-to-pupil ratio to ensure maximum progress for each student.

The school has always had a profound effect on visitors. People walk through SCHI’s doors and experience humanity in its purest form. They see care and dedication that don’t exist elsewhere in their lives. It is always extremely moving, leaving an indelible impression on them.