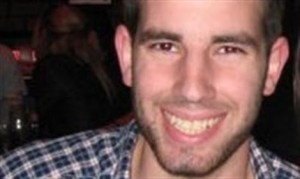 Malachi Rosenfeld, the 27-year old wounded in the shooting attack Monday night, died of his wounds on Tuesday evening at the Shaare Zedek Medical Center in Jerusalem.

Rosenfeld was shot in the torso as he was driving home with three friends to his hometown of Kokhav HaShahar, northeast of Ramallah.

The four men were returning from a basketball game near the Israeli community of Shvut Rachel when Palestinian gunmen opened fire on their car in what security sources believe to have been a premeditated ambush.

The attack was one in a series of violent events that have rocked Israel since the beginning of the month of Ramadan two weeks ago, including the murder of an Israeli civilian on June 19 and attacks on IDF soldiers and Israeli Border Police.

Rosenfeld, the son of popular Israeli clarinetist Eliezer Rosenfeld, was a graduate of the Machon Lev technological yeshiva in Jerusalem, and was studying at the Hebrew University.

The three men he was travelling with remain hospitalized; one is in light condition, while the other two are in moderate but stable condition.

Watch a video of the scene of the attack HERE.