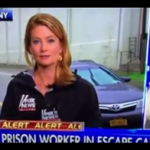 [Video below.] Eagle-eyed viewers of On the Record noticed something during Molly Line’s liveshot outside Clinton Correctional Facility two nights ago, TV Newser reports.  A man crossed the street behind Line holding a red bag that was then hoisted over the other side of the prison wall with a rope.

Van Susteren was immediately flooded with emails and social media posts from viewers who thought contraband was being hoisted into the prison which saw an elaborate jailbreak last weekend.

Greta’s team looked into it and did an update later in the show: Turns out it was a legitimate — though unusual — delivery.