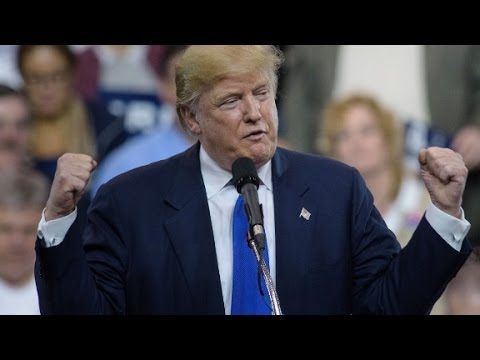 Republican frontrunner Donald Trump threatened today to send his supporters to infiltrate the campaign rallies of Democratic hopeful Bernie Sanders, whom Trump continued to insist was behind disruptions at his events.

“Bernie Sanders is lying when he says his disruptors aren’t told to go to my events,” Trump said on Twitter. “Be careful Bernie, or my supporters will go to yours!”

Trump said during an appearance Sunday on CNN’s “State of the Union” that he didn’t consider his post on social media to be a threat. He repeated his charge that Sanders had lied when he said his campaign wasn’t behind an influx of protesters that led to the cancellation of Trump’s planned rally in Chicago on Friday, where violence spilled onto the streets.

Appearing later on the same program, Sanders said Trump was the liar.

“This man cannot stop lying,” the senator from Vermont said.

Sanders said he has many supporters, and while some may attend Trump events as a form of peaceful protest, they are not doing so at his direction.

“I would hope my supporters will not disrupt meetings,” Sanders said. “We have millions of supporters, and people do things. But it was not our campaign.”

He blamed Trump for creating the environment that has led to violence at his rallies.

“This a man who keeps implying violence, and then you end up getting what you see,” Sanders said.

During his appearance, Trump predicted that if his supporters come to Sanders events, they would be treated badly.

“They’d be arrested and all sorts of things would happen to them,” Trump said.