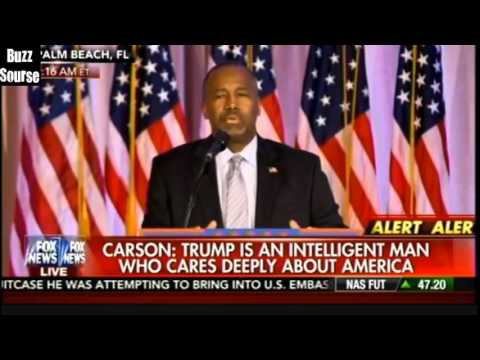 The endorsement by Carson, who last week suspended his campaign for the Republican presidential nomination, is perhaps the most high-profile nod for Trump since New Jersey Gov. Chris Christie backed his former rival.

At a news conference at a Trump-owned Mar-a-Lago luxury club in Florida, Carson said there are “two Donald Trumps” – including a measured side of someone who “considers things carefully.”

The remarks appeared aimed at moderating Trump’s image, which has been defined by bluster, belligerence and belittling comments against opponents, including Carson. Trump said the two have “buried the hatchet.”

Carson, however, acknowledged that the country is greatly divided and “hating each other” – rifts that have been amplified by the current presidential race.

He also issued an apparent message to GOP establishment leaders who have raised deep concerns about Trump’s possible push toward the nomination.

Carson warned that it is “extremely dangerous” if political parties seek to “thwart the will of the people” and must let the “voice of the people be heard.”

Trump said Carson will a “big, big part” in the campaign, but gave no specifics on possible roles.

During a Republican presidential debate aired on CNN on Thursday night, Trump confirmed Carson’s backing. He said they discussed Carson’s ideas on education and other topics earlier in the day.

“We spoke for over an hour on education. And he has such a great handle on it,” Trump said. “I’m going to have Ben very involved with education, something that’s an expertise of his.”

The support of Carson, a famed retired neurosurgeon and author, will likely give Trump a boost with GOP base voters and evangelicals, who embraced Carson’s campaign in its early days and fueled his brief rise to the top of Republican primary polls.

Carson’s decision may surprise some of his backers since Trump made blistering critiques over the past year of stories from Carson’s past. But according to people close to him, Carson has gradually come to see Trump as the GOP’s best chance of winning a general election and turning out droves of disengaged voters.

Carson halted his campaign this month, telling supporters he saw “no path forward” for his bid. He then officially dropped out of the race in a speech at the Conservative Political Action Conference.

Ever since, Carson has been based at his winter home in West Palm Beach, not far from Mar-a-Lago, which made Thursday’s quiet get-together convenient for the former candidate. 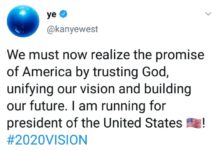