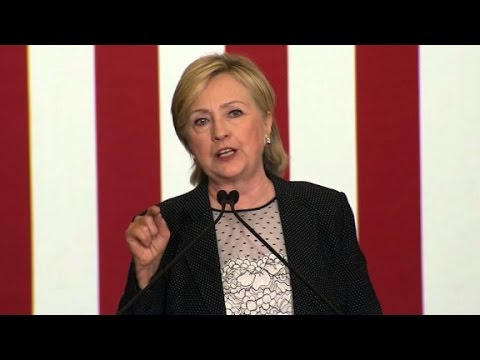 Hillary Clinton ripped Donald Trump’s economic plan as a boon to the wealthiest Americans, including himself and his family, that will only increase the burden on middle-income taxpayers already pressured by stagnant wages.

In a speech at a Michigan manufacturing plant on Thursday, the Democratic presidential nominee sought to draw a stark contrast between her plans for the economy, which she argued would benefit a broad range of Americans, and the Republican’s proposals, which she said are aimed only at helping people like him.

Trump “hasn’t offered any credible solutions for the very real economic challenges we face,” Clinton said at Futuramic Tool & Engineering in Warren. Instead he’s proposed a tax plan that ” would allow him to pay less than half the current tax rate on income from many of his companies. He’d pay a lower rate than millions of middle class families.”

Clinton didn’t lay out any new policies in her address. With the economy most frequently cited by voters as the top issue in the election, her main aim was to undercut Trump’s claim that his business experience gives him the expertise needed to spur job and income growth and to portray him as acting out of self-interest rather than in the national interest.

The first component of that is attacking the economic plan Trump laid out Monday in Detroit as a retread of Republican ideas that benefit the wealthy at the expense of the middle class.

The second part is challenging his business record. Clinton in recent weeks has made a point of stopping at small businesses in swing states where she’s recounted his history of manufacturing products overseas, hiring foreign workers over U.S. citizens and refusing to pay some contractors.

“He’s made a career of stiffing small businesses from Atlantic City to Las Vegas,” Clinton said. “There are companies that were left hanging but paid their workers anyway — putting businesses they’d worked a lifetime to build at risk.”

There’s evidence that Clinton’s attack on Trump’s record and media reports about his background have had some effect. In a Bloomberg Politics national poll conducted Aug. 5-8, 61 percent of likely voters said they’re less impressed with the Republican nominee’s business acumen than when the campaign started. Still, 51 percent of those polled said Trump “knows what it takes to create jobs” compared with 42 percent who said that of Clinton.

In a pre-emptive response issued via e-mail before Clinton’s speech, Trump’s campaign cited one analysis found that her tax plan would shrink the gross domestic product, costing jobs.

That analysis, which was performed by the conservative Tax Foundation in Washington, that found Clinton’s plan would reduce GDP by 1 percent over the long-term because it would create “slightly higher marginal tax rates on capital and labor.” That finding is based on a model that attempts to account for changes in taxpayers’ behavior that result from changes in tax law. Other economists criticize aspects of that model.

Applying its model to Clinton’s tax plan, the Tax Foundation found that her proposals would raise $191 billion over a decade. In contrast, the Tax Policy Center, a joint effort of the Urban Institute and the Brookings Institution, found that it would raise $1.1 trillion over the same time frame.

But Trump has proved to be a shifting target for Clinton on economic policy. Beyond promising rate cuts for individuals and businesses Trump has strayed from Republican orthodoxy on entitlements and government spending.

He said Thursday morning on CNBC, for example, that he’d more than double the $275 billion Clinton proposes to spend on infrastructure projects over five years and do so by increasing government debt. “This is the time to borrow,” he said.

Clinton has signaled her opposition to the U.S. taking on more debt by pledging to “fully pay for these investments through business tax reform,” according to a fact sheet on her website.

Clinton reiterated her call for an infrastructure bank, a proposal President Barack Obama advanced only to see it stall for lack of Republican support. U.S. spending is projected to fall about $1.4 trillion short of the $3.3 trillion needed through 2025 for airports, highways and other infrastructure, according to the American Society of Civil Engineers.

Describing herself as a product of the middle class, Clinton acknowledged the anger among Americans who she said feel trapped by a system that blocks them from the upward mobility that previous generations enjoyed.

“If you work hard and do your part, you should be able to give your children all the opportunities they deserve. That’s the basic bargain of America,” Clinton said. “Whether we will be able to renew that bargain on even better terms for the 21st century depends in no small part on the outcome of this election.”

One issue where the nation’s political mood has pushed the positions of Clinton and Trump closer is trade. Trump is proposing tariffs to penalize what he characterizes as unfair practices by some U.S. trade partners and taking actions to force U.S. companies to keep their operations within the country’s borders. While Clinton hasn’t gone as far with an anti-globalization tilt, she’s switched to criticism of the Obama administration’s centerpiece trade initiative, the Trans-Pacific Partnership.

Trump has suggested that Clinton would soften her position on the accord if she’s elected. But she said bluntly Thursday that she will not waver on the current version of the deal. “I will stop any trade deal that kills jobs or holds down wages-including the Trans-Pacific Partnership,” she said. “I oppose it now, I’ll oppose it after the election and I’ll oppose it as president.”

Clinton is hoping to put Trump on defense not only on his economic policies but on his own wealth with a renewed effort to pressure him to release his tax returns. Her campaign plans to release her 2015 filing – adding to more than three decades of Clinton returns already in the public domain-and 10 years of vice-presidential nominee Tim Kaine’s returns in the coming days.