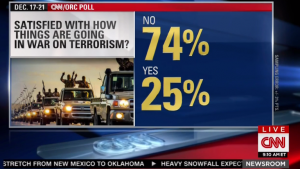 CNN anchor Poppy Harlow passed out this morning mid-broadcast, while reporting on the fight against ISIS terrorists.

Following an interview with fellow CNN presenter Becky Anderson, Harlow’s speech slurred and slowed down before she stopped talking altogether and the cameras cut to commercial. She later returned to the air and explained that she had experienced a brief syncopic episode and had recovered.