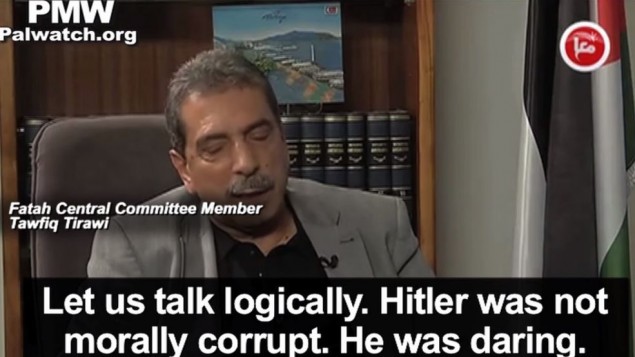 A senior official in Mahmoud Abbas’s Fatah movement told Palestinian TV that Adolf Hitler “was not morally corrupt, he was daring,” before he was cut off by his host.

“There is a difference between an officer’s discipline and loyalty to a leader. The leader could be morally corrupt,” said Tawfik Tirawi, a member of the Fatah Central Committee, according to the Palestinian Media Watch (PMW) organization.

When the host asked him how he knew, Tirawi answered: “You have to know. Is there anyone who does not know his leader?”

The host at this point told Tirawi, “It would be a pity to be put in jail because of this interview. We will drink tea and take a break. Let’s leave Hitler.”

The interview took place last week, and was highlighted and translated on Wednesday by the watchdog group Palestinian Media Watch. Read more at Times of Israel.