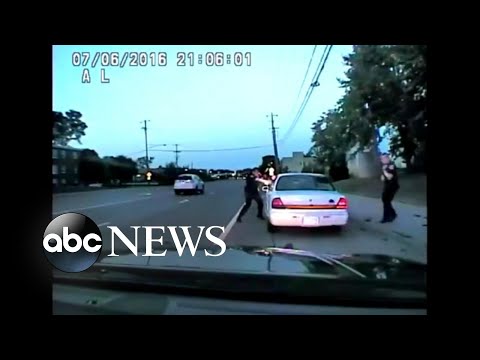 The Minnesota police officer who fatally shot Philando Castile during a traffic stop last year fired a volley of bullets within seconds of learning the driver was armed, according to a video recording released publicly Tuesday.

“Sir, I have to tell you that I do have a firearm on me,” Castile said 30 seconds after they began speaking.

“Okay,” Yanez interrupted, his voice remaining steady as he shifted his right hand onto the holster of his gun.

Yanez told Castile not to reach for the gun or pull it out. Castile said he was not, which was echoed by Diamond Reynolds, his girlfriend, sitting in the Oldsmobile’s passenger seat.

“I’m not pulling it out,” Castile responded. Yanez again yelled: “Don’t pull it out!” He then unholstered his gun and pushed it into the car.

“Don’t pull it out!” Yanez yelled. “I’m not!” Castile said as Yanez, seven seconds after being informed of the gun, began firing into the car.

The moments after quickly made their way around the world, as Reynolds began streaming live on Facebook, pleading with Castile to “stay with me” while blood soaked into his T-shirt. Castile died not long after. Spurred by Reynolds’s video, that fatal shooting in July 2016 became part of the country’s roiling debate about how police officers use deadly force.

A jury acquitted Yanez of manslaughter last week, a decision that set off protests in the St. Paul area. The same day, St. Anthony officials said Yanez would not be returning to their police department. Yanez also was acquitted on two felony charges of endangering Reynolds – who was sitting in the passenger seat – and her 4-year-old daughter, who was sitting behind her in a car seat.

Castile was among 963 people fatally shot by police officers last year, according to a Washington Post database tracking such shootings. While Reynolds’s footage pushed the encounter into the headlines, making it one of the most widely known police shootings in recent years, it was not the only recording captured that night.

A police dashboard camera was also filming, and that recording was played during Yanez’s trial but was not publicly released until Tuesday afternoon. Details from the recording were revealed in court documents and during the trial, but they were not publicly visible in the same way as Reynolds’s viral Facebook footage. The dash-cam video does not clearly show Castile’s movements inside the car.

Yanez told investigators he feared for his life, and he said the same thing during his testimony earlier this month. According to the officer, he thought Castile was grabbing a gun, which Reynolds had disputed.

“I know he had an object and it was dark,” Yanez told investigators, according to the criminal complaint filed by prosecutors last year. “And he was pulling it out with his right hand. And as he was pulling it out I, a million things started going through my head. And I thought I was gonna die.”

The police car dash-cam video was part of evidence released Tuesday afternoon by the Minnesota Department of Public Safety. The collection included documents and other recordings that were part of the state’s investigation into the shooting. The documents and recordings were being made “available to the public, as they were presented in court, but without the context that we were able to provide at trial,” according to a spokesman for Ramsey County Attorney John J. Choi, who prosecuted the case.

An attorney representing Yanez did not immediately respond to an email seeking comment.

Experts caution that video footage of police shootings can remain incomplete and, even if capturing an entire incident, might not definitively answer what an officer saw at that moment.

“The officer’s judged by what he or she reasonably sees or perceives,” said David J. MacMain, a former Pennsylvania state trooper and attorney who represents law enforcement officers in civil cases.

MacMain also said that when videos are released publicly, the encounters are dissected in a different way than officers perceive them while they unfold.

“We all get to look at it 20 times over and replay and zoom in and zoom out,” MacMain said. “Officers have to make split-second decisions, and we all get to critique it over the next four, five, six, seven months.”

Recordings are inevitably incomplete, said David Harris, a law professor at the University of Pittsburgh and an expert in police uses of force.

“Video doesn’t always capture the whole sequence of events,” Harris said. “This case was an example of that. We have a situation in which the Facebook Live stream only begins after the shooting itself. And it’s horrible. I don’t know how anybody could see that and not be affected by it. But it doesn’t show the actual shooting.”

Harris said that even if a recording showed Castile grabbing his wallet or grabbing a gearshift, that might not necessarily have swayed the trial’s outcome.